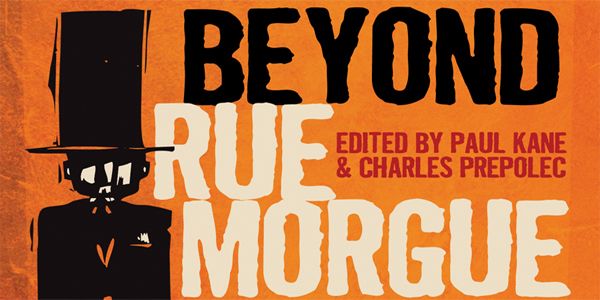 New Murders in the Rue Morgue

Winter, Lewis decided, was no season for old men. The snow that lay five inches thick on the streets of Paris froze him to the marrow. What had been a joy to him as a child was now a curse. He hated it with all his heart; hated the snowballing children (squeals, howls, tears); hated, too, the young lovers, eager to be caught in a flurry together (squeals, kisses, tears). It was uncomfortable and tiresome, and he wished he was in Fort Lauderdale, where the sun would be shining.

But Catherine’s telegram, though not explicit, had been urgent, and the ties of friendship between them had been unbroken for the best part of fifty years. He was here for her, and for her brother Phillipe. However thin his blood felt in this ice land, it was foolish to complain. He’d come at a summons from the past, and he would have come as swiftly, and as willingly, if Paris had been burning.

Besides, it was his mother’s city. She’d been born on the boulevard Diderot, back in a time when the city was untrammelled by free-thinking architects and social engineers. Now every time Lewis returned to Paris he steeled himself for another desecration. It was happening less of late, he’d noticed. The recession in Europe made governments less eager with their bulldozers. But still, year after year, more fine houses found themselves rubble. Whole streets sometimes, gone to ground.

Even the Rue Morgue.

There was, of course, some doubt as to whether that infamous street had ever existed in the first place, but as his years advanced Lewis had seen less and less purpose in distinguishing between fact and fiction. That great divide was for young men, who still had to deal with life. For the old (Lewis was seventy-three), the distinction was academic. What did it matter what was true and what was false, what real and what invented? In his head all of it, the half-lies and the truths, were one continuum of personal history.

Maybe the Rue Morgue had existed, as it had been described in Edgar Allan Poe’s immortal story; maybe it was pure invention. Whichever, the notorious street was no longer to be found on a map of Paris.

Perhaps Lewis was a little disappointed not to have found the Rue Morgue. After all, it was part of his heritage. If the stories he had been told as a young boy were correct, the events described in “The Murders in the Rue Morgue” had been narrated to Poe by Lewis’s grandfather. It was his mother’s pride that her father had met Poe, while travelling in America. Apparently his grandfather had been a globe-trotter, unhappy unless he visited a new town every week. And in the winter of 1835 he had been in Richmond, Virginia. It was a bitter winter, perhaps not unlike the one Lewis was presently suffering, and one night the grandfather had taken refuge in a bar in Richmond. There, with a blizzard raging outside, he had met a small, dark, melancholy young man called Eddie. He was something of a local celebrity apparently, having written a tale that had won a competition in the Baltimore Saturday Visitor. The tale was “MS. Found in a Bottle” and the haunted young man was Edgar Allan Poe.

The two had spent the evening together, drinking, and (this is how the story went, anyway) Poe had gently pumped Lewis’s grandfather for stories of the bizarre, of the occult, and of the morbid. The worldly wise traveller was glad to oblige, pouring out believe-it-or-not fragments that the writer later turned into “The Mystery of Marie Rogêt” and “The Murders in the Rue Morgue”. In both those stories, peering out from between the atrocities, was the peculiar genius of C. Auguste Dupin.

C. Auguste Dupin. Poe’s vision of the perfect detective: calm, rational, and brilliantly perceptive. The narratives in which he appeared rapidly became well known, and through them Dupin became a fictional celebrity, without anyone in America knowing that Dupin was a real person.

He was the brother of Lewis’s grandfather. Lewis’s great uncle was C. Auguste Dupin.

And his greatest case—the Murders in the Rue Morgue—they too were based on fact. The slaughters that occurred in the story had actually taken place. Two women had indeed been brutally killed in the Rue Morgue. They were, as Poe had written, Madame L’Espanaye and her daughter Mademoiselle Camille L’Espanaye. Both women of good reputation, who lived quiet and unsensational lives. So much more horrible then to find those lives brutally cut short. The daughter’s body had been thrust up the chimney; the body of the mother was discovered in the yard at the back of the house, her throat cut with such savagery that her head was all but sawn off. No apparent motive could be found for the murders, and the mystery further deepened when all the occupants of the house claimed to have heard the voice of the murderer speaking in a different language. The Frenchman was certain the voice had spoken Spanish, the Englishman had heard German, the Dutchman thought it was French. Dupin, in his investigations, noted that none of the witnesses actually spoke the language they claimed to have heard from the lips of the unseen murderer. He concluded that the language was no language at all, but the wordless voice of a wild beast.

An ape in fact, a monstrous orang-outang from the East Indian Islands. Its tawny hairs had been found in the grip of the slain Madame L’Espanaye. Only its strength and agility made the appalling fate of Mademoiselle L’Espanaye plausible. The beast had belonged to a Maltese sailor, had escaped, and run riot in the bloody apartment on the Rue Morgue.

That was the bones of the story.

Whether true or not, the tale held a great romantic appeal for Lewis. He liked to think of his great uncle logically pacing his way through the mystery, undistressed by the hysteria and horror around him. He thought of that calm as essentially European; belonging to a lost age in which the light of reason was still valued, and the worst horror that could be conceived of was a beast with a cut-throat razor.

Now, as the twentieth century ground through its last quarter, there were far greater atrocities to be accounted for, all committed by human beings. The humble ourang-outang had been investigated by anthropologists and found to be a solitary herbivore, quiet and philosophical. The true monsters were far less apparent, and far more powerful. Their weapons made razors look pitiful, their crimes were vast. In some ways Lewis was almost glad to be old and close to leaving the century to its own devices. Yes, the snow froze his marrow. Yes, to see a young girl with a face of a goddess uselessly stirred his desires. Yes, he felt like an observer now instead of a participator.

But it had not always been that way.

In 1937, in the very room at number eleven Quai de Bourbon where he now sat, there had been experience enough. Paris was still a pleasure dome in those days, studiously ignoring rumors of war, and preserving, though at times the strain told, an air of sweet naiveté. They had been careless then, in both senses of the word, living endless lives of perfect leisure.

It wasn’t so of course. The lives had not been perfect, or endless. But for a time—a summer, a month, a day—it had seemed nothing in the world would change.

In half a decade Paris would burn, and its playful guilt, which was true innocence, would be soiled permanently. They had spent many days (and nights) in the apartment Lewis now occupied, wonderful times; when he thought of them his stomach seemed to ache with the loss.

His thoughts turned to more recent events. To his New York exhibition, in which his series of paintings chronicling the damnation of Europe had been a brilliant critical success. At the age of seventy-three Lewis Fox was a fêted man. Articles were being written in every art periodical. Admirers and buyers had sprung up like mushrooms overnight, eager to purchase his work, to talk with him, to touch his hand. All too late, of course. The agonies of creation were long over, and he’d put down his brushes for the last time five years ago. Now, when he was merely a spectator, his critical triumph seemed like a parody: he viewed the circus from a distance with something approaching distaste.

When the telegram had come from Paris, begging for his assistance, he had been more than pleased to slip away from the ring of imbeciles mouthing his praise.

Now he waited in the darkening apartment, watching the steady flow of cars across the Pont Louis-Philippe, as tired Parisians began the trek home through the snow. Their horns blared, their engines coughed and growled, their yellow foglamps made a ribbon of light across the bridge.

The snow, which had held off for most of the day, was beginning to fall again, whispering against the window. The traffic flowed across the Seine, the Seine flowed under the traffic. Night fell. At last, he heard footsteps in the hall, exchanged whispers with the housekeeper.

He stood up and stared at the door, imagining it opening before it opened, imagining her in the doorway.

She smiled at him, a pale smile on a paler face. She looked older than he’d expected. How long was it since he’d seen her? Four years or five? Her fragrance was the same as she always wore: and it reassured Lewis with its permanence. He kissed her cold cheeks lightly.

Her manner was brisk, and forbidding, as always.

She was three years his senior, but she treated him as a teacher would a recalcitrant child. She always had: it was her way of being fond.

Greetings over, she sat down beside the window, staring out over the Seine. Small grey ice floes floated under the bridge, rocking and revolving in the current. The water looked deadly, as though its bitterness could crush the breath out of you.

“What trouble is Phillipe in?”

A tiny hesitation. A flicker of an eyelid.

Lewis wanted to laugh; the very thought was preposterous. Phillipe was sixty-nine years old, and as mild-mannered as a lamb.

“It’s true, Lewis. I couldn’t tell you by telegram, you understand. I had to say it myself. Murder. He’s accused of murder.”

“A girl, of course. One of his fancy women.”

“He still gets around, does he?”

“We used to joke he’d die on a woman, remember?”

“She was nineteen. Natalie Perec. Quite an educated girl, apparently. And lovely. Long red hair. You remember how Phillipe loved redheads?”

“Nineteen? She has nineteen years old?”

She didn’t reply. Lewis sat down, knowing his pacing of the room irritated her. In profile she was still beautiful, and the wash of yellow-blue through the window softened the lines on her face, magically erasing fifty years of living.

Lewis shook his head. There was a pain at his temples, which might go if he could only close his eyes.

“He needs to see you. Very badly.”

But maybe sleep was just an escape. Here was something even he couldn’t be a spectator to.