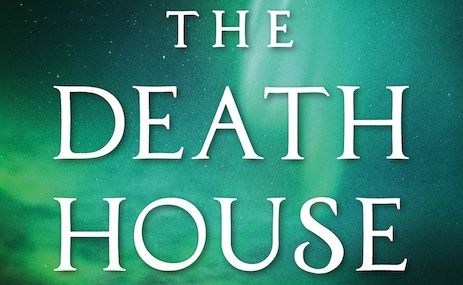 I don't write many short stories, and when I do, they tend to be things I write in order to play around with an idea that I think might grow into a novel. 'The Nowhere Man' grew into The Nowhere Chronicles trilogy (under the name Sarah Silverwood) and The Death House began its life in a story written about five years ago for a British Fantasy Society anthology, which was called 'Snow Angels'.

Although both versions are set in a remote house at some point in the future where potentially sick children are sent to die, there are marked difference between the two. 'Snow Angels' has a darker, supernatural element and the dystopian world is much more expanded upon than in The Death House. And in 'Snow Angels', at the end we also see one of the children back out in the world as an adult, remembering and fearing the events of his childhood as fresh snow falls outside and he wonders what's inside it.

When I'd finished 'Snow Angels', however, I knew I would want to revisit it. But not the world, per se, but the children who'd lived in the house. They were who lingered with me. I knew that if I developed the idea their experiences would be the focus and not the surrounding world. Yes, The Death House is a dystopia of sorts, and yes, there are clues that we are somewhere in the future – in the novel as in the short story it hasn't snowed in England for over a hundred years – but it wasn't the world that had stayed with me when I handed the story in – it was the children. And thinking about the house, and the children, I then found myself thinking of my own childhood.

When I was a kid, we lived in Damascus until I was eight years old. I'd been to an American school, and spent the days playing on the dusty playground in jeans and T-shirts. At eight, I went to an English all-girls boarding school. The transition from so much freedom to so much regulation was enormous for me, an entire change of world, and when I 'see' the Death House in my head, it's very much that first boarding house. Not so much the layout, but the essence of it. The sense that everything is just that little bit out of date. Home but not home and with the feeling that so many had come before you and there would be many after. Just looking at the old tatty paperbacks on the playroom shelves would remind you, seeing where girls a decade or three before had scribbled their names and messages in them. Boarding schools back then were not necessarily happy places – remember in 1980 there were no computers, no mobile phones and if your parents lived somewhere like the Sudan (as mine did) the best contact you could hope for was the weekly letter – but the house and those in it became your world. Your dorm-mates became your pack and it didn't take much for someone to be sent to Coventry or for girls who could be quite nice on their own to become bullies or bitchy when hanging out with new people, and there was always, always a hierarchy. It might shift here and there, but it existed. The older girls. The youngest girls. The naughtiest girl in the house. The prettiest girl in the house. The fattest girl in the house. The girl who was always homesick. Each had a place on the ladder. But we were also a family. Like it or not, we shared our regulated world. We were set apart from the day girls who bussed in and out from home every day, and if it came down to a clash between day girls and boarders, the boarders always stood together.

In my twenties, and probably thirties, I was quite dismissive of the ten years I spent boarding. We put school behind us fast when we're so eager to be adults. But now I find myself wondering how much the good and bad of those draughty old houses with their sinister housemistresses have shaped who I am. Whether I like it or not, the time I spent there amounts to about a quarter of my life and I still have very mixed feelings about it all. So, having decided that I wanted to write something about the group dynamics of youth, I realised that I also wanted to get something of the sense of an old-fashioned boarding school into the novel too, if only as a personal catharsis. In the Death House, the wider dystopic world isn't the establishment. As with going to boarding school back in the 80s, once you step through the door, there is no outside world order that matters. The rules of the house are the ones you either obey or rebel against.

Those kids that I've populated The Death House with; angry Toby, vibrant Clara, too clever Louis, sweet Will, cocky Jake, and religious Ashley amongst others, are facing much worse when they arrive at the Death House than any 80's boarding school new girl. It might have felt to us as if we were never going to leave, but for them, that is a certainty.

The title makes the book sound like a very dark and scary story, but while death may hover over those who inhabit the pages, The Death House is not about death. It's about friendships. It's about making the best of a shit situation. It's about seizing the moment. It's about learning not to be afraid. And most of all, it's about love.

Because everybody dies. It's how we choose to live that counts.

Sarah Pinborough is the author of The Death House, out today in the US from Titan Books! Wonderful praise for The Death House:

“I loved The Death House. It’s moving and totally involving. Pinborough writes with vividness and emotional resonance. I couldn’t put it down.” Stephen King

“Situated somewhere between Margaret Atwood’s The Handmaid’s Tale and William Golding’s Lord of the Flies, The Death House is a moving triumph with a gut-punch of a denouement.” Independent on Sunday

“In a world where death is everywhere, every breath, every heartbeat becomes precious. Pinborough’s vivid writing ensures her readers feel every one.” Telegraph

“Echoing William Golding’s Lord of the Flies [and] Kazuo Ishiguro’s Never Let Me Go… The hopes and fears of the main teenage characters are superbly evoked before a heart-rending conclusion.” Sydney Morning Herald