Today on the Titan blog we're kicking off day 2 of the Dark Immolation blog tour with an exclusive extract from Chris Husberg's brand new fantasy release. Enjoy and follow the rest of the tour down below! 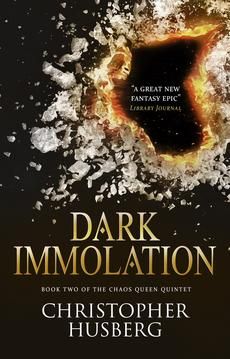 The woman does not dream because she no longer sleeps. She lies on a filthy pile of straw in one corner of the cell, legs angled awkwardly beneath her, arms outstretched. She is uncomfortable but the feeling is vague and distant. Sensation no longer matters. The voices in the woman’s head, whispering and whispering, seem to no longer matter, either.

Revenge, another part whispers. That part of her that still thinks she has control. That still thinks what she does matters. Punish those who hurt us. Avenge the fallen.

But another part of the woman wonders why revenge is necessary. Those she loves are dead. A permanent condition, and once it takes hold that person ceases to exist and enters the inescapable pull of Oblivion.

The woman is not dead. She knows that well enough. And, quite clearly, she does not wish to be dead. She does not fear much, anymore, but that is one thing she does: ceasing to exist. True oblivion. Nothingness.

The woman feels sadness for those lost, but even that is only a dull ache, where it was once a tortured hollowing of her insides.

She lies back and lets her mind drift, lets it jump. She wonders whether she could just leave her body behind, and live in the minds of others. Perhaps she could be free, both of her dungeon cell and the prison of her body.

Then, her mind fixes upon the person closest to her.

Check out our Twitter page to see where the tour is going next!