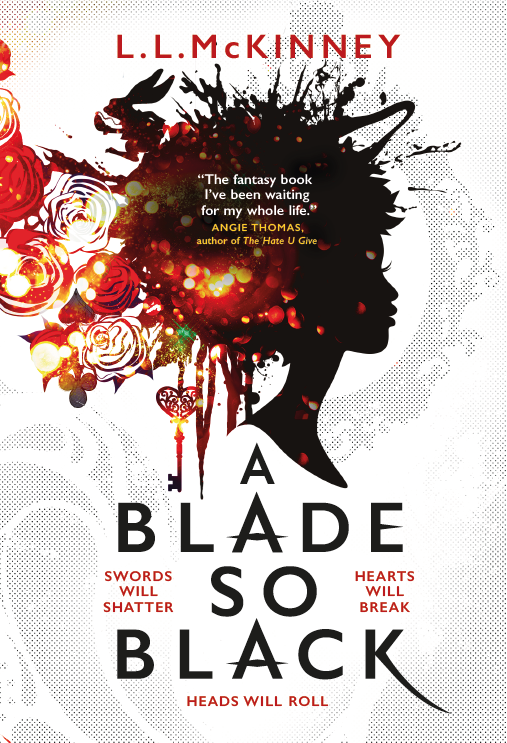 A Twisted New Take on Alice in Wonderland

A Blade So Black

The first time the Nightmares came, it nearly cost Alice her life. Now she's trained to battle monstrous creatures in the dark dream realm known as Wonderland with magic weapons and hardcore fighting skills. Yet even warriors have a curfew.

Life in real-world Atlanta isn't always so simple, as Alice juggles an overprotective mom, a high-maintenance best friend, and a slipping GPA. Keeping the Nightmares at bay is turning into a full-time job. But when Alice's handsome and mysterious mentor is poisoned, she has to find the antidote by venturing deeper into Wonderland than she’s ever gone before. And she'll need to use everything she's learned in both worlds to keep from losing her head... literally.Debut author L.L. McKinney delivers an action-packed twist on an old classic, full of romance and otherworldly intrigue. 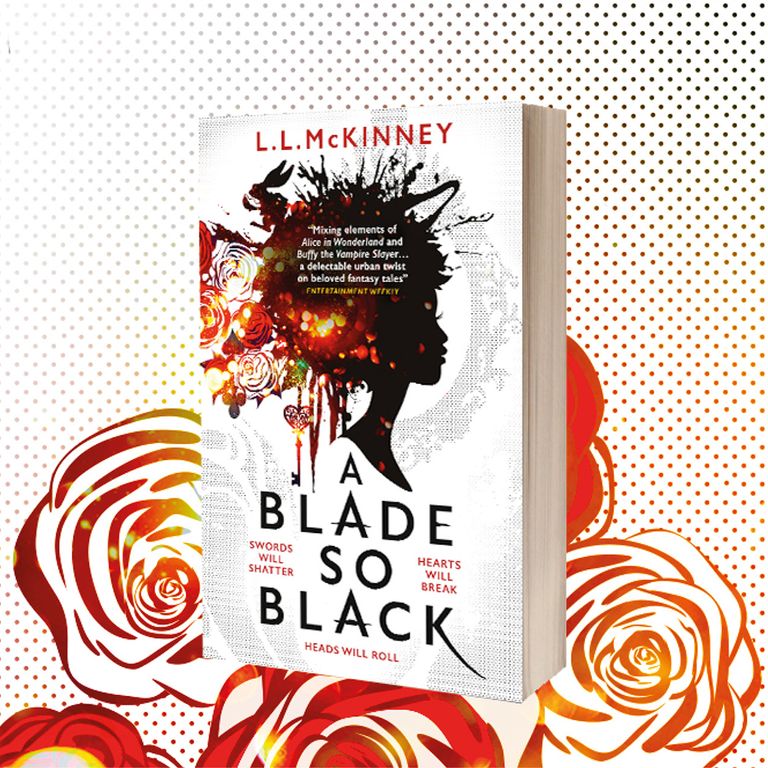 Alice dropped into a slide as a barbed tail lashed through the air overhead. The Nightmare, a massive thing with a rhino’s body and spindly, almost-human arms sticking up from its back, tumbled past. She twisted out of the slide and caught her balance in a crouch before exploding forward to drive her dagger at the monster’s side. The blade glanced off with a crack like striking stone. Armored hide. She spun outside another swing of the tail and leaped, aiming to land atop the creature. It swatted her aside like a gnat instead of her tall-ass self.

The impact robbed her of breath and the ability to scream when a white-hot throb lanced up her arm. She hit the ground in a roll, then twisted out of it, her knees on fire. Blood ran warm and slick where claws had torn into her forearm.

“Dammit.” She swapped her weapon to her other hand, shifting to shield her wound. “Hatta!” Her eyes flickered between the monster and the treetops. Where was he?

The Nightmare howled and came at her again.

Every inkling of self-preservation shouted to jump, dive, get out of the way. At the last instant she jerked to the side. The beast crashed into a tree, tearing it up from the roots. Wood groaned and snapped. Leaves shivered and fell like rain. Blue moonlight spilled into the clearing.

Alice ducked a spindly, talon-tipped arm. She jabbed the dagger into the rippling flesh of the monster’s underbelly and yanked. Something wet, thick, and rank spilled over her hand. She gritted her teeth and pushed.

The knife sank farther into the creature and, with a snap and hiss, pierced its core.

Yes! A thrill blazed through Alice. She smiled. That’s right, you sonuva—

The Nightmare loosed a keening cry and lashed out, slicing into the trees and scoring the earth. Alice shuffled aside, dagger ready as her target staggered, limbs twisting, body buckling. The creature collapsed inward like crumbling stone. Its wounds popped and fizzed, spewing yellow goop across the dirt and onto her shoes.

"Augh.” She danced backward and wobbled as she shook each foot. Too late—the pus had already soaked into the material. “Really? Really.” Another pair of kicks ruined. Along with her good mood. “Perfect.” She couldn’t afford a new pair of shoes right now! Or jeans. And asking her mother was not happening. Who knew being a superhero meant going broke.

Pop. The body started to dissolve. She pinched her nose against the stink, which no doubt clung to her, thick and gross.

As she wiped the dagger on her already-ruined jeans, a second shadow dropped from the branches of a nearby tree. She whirled, body sliding into a defensive stance, weapons up.

“Easy, luv.” Silhouetted in shadow, Hatta’s face was hidden, but Alice knew he was smiling. Bastard was always smiling. “It’s just me.

”Alice straightened and glowered at him. “It’s just me,” she mimicked, scrunching her nose and pitching her voice higher. Releasing a heavy breath, she sheathed the blades and tilted against the toppled tree to assess her injuries.

---WHAT THE CRITICS ARE SAYING ABOUT A BLADE SO BLACK---

"With memorable characters and page-turning thrills, A Blade So Black is the fantasy book I've been waiting for my whole life. Alice is Black Girl Magic personified."

―Angie Thomas, #1 New York Times-bestselling author of The Hate U Give

"I loved the 'our world' framing and the 'other world' adventure so deeply. They were at such odds, but the overall effect was just chefkiss.gif perfect."

"Wholly original and absolutely thrilling―A Blade So Black kicks so much (looking gl)ass."

―Heidi Heilig, author of The Girl From Everywhere

"Mixing elements of Alice in Wonderland and Buffy the Vampire Slayer... a delectable urban twist on beloved fairy tales."

"This really is Lewis Carroll by way of Buffy, and it makes for a fun, gritty urban fantasy... will set the new standard for teen readers."

"A dark, thrilling fantasy-meets-contemporary story with a kickass heroine."

"An action-packed twist on an old classic, full of romance and otherworldly intrigue."

"Retold fairy tales have been a popular trend... but you’ve never read one quite like A Blade So Black."

"A brash, refreshing, vitally diverse retelling of a classic... You need this book."

"This isn't a retelling, this is Alice in Wonderland 2.0."

"An explosive, kickass debut ... the Alice in Wonderland retelling the world has always needed."

"A thrilling, timely novel that ensures readers will be curiouser for a sequel."

"Teens will root for Alice as a strong, multidimensional black girl usually unseen in YA fiction... A must-purchase."

"With a modern flair, a rich backstory, and just enough emotional heft, this particular looking glass will have readers eagerly falling through it."

―Bulletin of the Center for Children's Books

"An epic about Black Girl Magic."