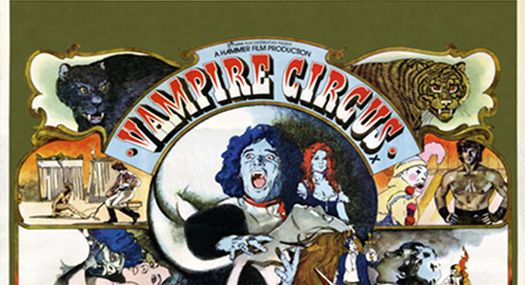 Can You Judge a Movie By its Poster?

The artwork of Hammer Films is almost as legendary as the movies that made them famous. Their eye-catching designs, featuring some of cinema’s most memorable characters, are truly a sight to behold. They say you can't judge a book by its cover, but can you judge a film by its poster? Here are five classic Hammer posters that should answer the question once and for all. Pick up a copy of Marcus Hearn’s The Art of Hammer: Posters From the Archive of Hammer Films to take this amazing artwork home with you.

What you see: Tom Chantrell’s iconic illustration of Raquel Welch in a fur bikini – an image that has been emblazoned onto the brains of adoring fans everywhere – set against the chaos of man versus dinosaur, amidst a volcanic, prehistoric landscape.

What you get: A battle between the Rock and Shell tribe, and an outcast caveman named Tumak (John Richardson) trying to find a new home. He meets Shell tribe babe Loana (Welch) who teaches him the benefit of a more peaceful life and follows him wherever he goes. There are some excellent Ray Harryhausen effects, a catfight between Hammer hotties Martine Beswicke and Ms. Welch, and the breathtaking scenery of the Canary Islands.

Does the poster make the grade?: Definitely. Most people remember the poster before they remember the film – and many people recognize this iconic image without having ever seen the movie. This legendary poster is part of one of Hammer’s most successful marketing campaigns. 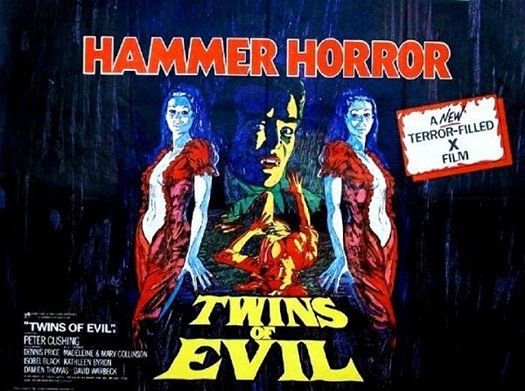 What you see: A pseudo psychedelic, paint-by-numbers/woodcut-like illustration by Mike Vaughan of a set of vampy vixens, flanking a portrait of Count Karnstein over his prone victim.

What you get: A rich, bored playboy – Count Karnstein – carries the family’s vampiric curse onward, seducing twin sisters (who, although they look alike, couldn’t be more opposite). He transforms one of them into a terrifying blood-sucker. There’s tons of ‘Witchfinder-esque’ bruja led by the great Peter Cushing, titillating scenes of Hammer’s foxy twins, Mary and Madeleine Collinson, and a dash of camp to lighten things up.

Does the poster make the grade?: If you’re a fan of psyched-out poster art, then this one might appeal to you … maybe. It could have pushed the trippy factor to the extreme, but the design wouldn’t have matched the movie. Mainly, this artwork is a product of the time it was made. Other versions, featuring photographic imagery, were created which play off catchy subtitles like: “One uses her beauty for love! One uses her lure for blood! Which is the virgin? Which is the vampire?”

What you see: Dr. Jekyll (Ralph Bates) waltzing down a dark alley with a strange, superimposed image of Sister Hyde (Martine Beswicke) on the back of his long, black coat. A wanted poster describing his likeness hangs out on the brick of the building.

What you get: An eccentric doctor and his exotic alter ego duking it out in a sinister showdown for command of his soul. The film presents some interesting questions about gender and sexual politics, but doesn’t take itself too seriously – while showing off some moody, gothic surroundings. It’s a refreshing and quirky take on a classic tale.

Does the poster make the grade?: This British quad’s distorted image of Beswicke isn’t winning any design awards, but it gets the job done. You get an iconic Jack the Ripper meets Jekyll/Hyde vibe, which isn’t nearly as exciting as the Belgian poster version, but it does make you wonder about the mysterious woman in question.

What you see: A classic, illustrated Hammer poster by Bill Wiggins featuring a painted montage of angry villagers, damsels in distress, and the handsome visage of Oliver Reed pictured below his inner beast.

What you get: A man (Reed) is cursed with lycanthropy and looks to love to cure him. While the poster’s imagery suggests a character similar to Universal’s incarnation of the primal monster, the film plays out closer to the works of Paul Naschy – and not just because of its Spanish backdrop. Reed’s raw sex appeal and brutish (and melodramatic) ways feels closer to the late Spanish actor, but he does capture the sympathy of his audience in a way reminiscent of Lon Chaney, Jr.

Does the poster make the grade?: The film is atmospheric and Wiggins’ artwork captures some of that with its wispy linework and gloomy-blue overtones. This is an example of the kind of poster you wish you could still see looming high in the sky on a theater marquee.

What you see: A colorful illustration by Vic Fair which uses old timey circus scrolls as its framework and gorgeous, little illustrations of the film’s scenes unfolding. As Marcus Hearn’s newest book -- The Art of Hammer -- points out, there are a few (gasp!) phallic images hidden within.

What you get: A village ravaged by the plague welcomes the company of a bizarre circus that rolls into town. The cast of strange characters takes an uncomfortable liking to the village’s children. Vampiric shenanigans ensue.

Does the poster make the grade?: Fair produced one of the more compelling images in Hammer’s later catalogue and it matches the film’s unusual approach to vampire lore. It’s a groovy layout, typical of the late ’60s and early ’70s, mixed with a classic style. Aside from some suggestive imagery, there are some cool transitions that happen within the drawing, like a cloak turning into a skull.