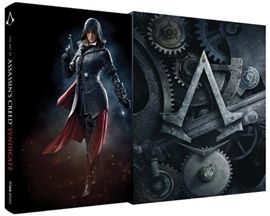 Gamers around the world are enjoying the Assassin's Creed universe — and Titan have the perfect way to celebrate the latest game, with this stunning edition of The Art of Assassin's Creed Syndicate: Limited Edition.

This beautiful collector's edition comes with not one but two signed art prints by game artists Felix Milo Flor and Tony Zhou Shuo. Limited to just 500 copies worldwide, it also comes in a specially designed slipcase — unique to this edition.

Highlights in the book include a close look at the London Boroughs, each realized in extraordinary detail, staying true to both the historical roots of the area and giving each their own visual identity and population. Intricately rendered buildings tower over slums and iconic thoroughfares while Jacob Frye, our newest Assassin, fights for control of the gangs roaming the streets of London.

This stunning edition is limited to 500 copies worldwide — so don't delay — ORDER NOW!