Sneak peek at the cover of Kim Newman’s brand-new novel, ANGELS OF MUSIC! 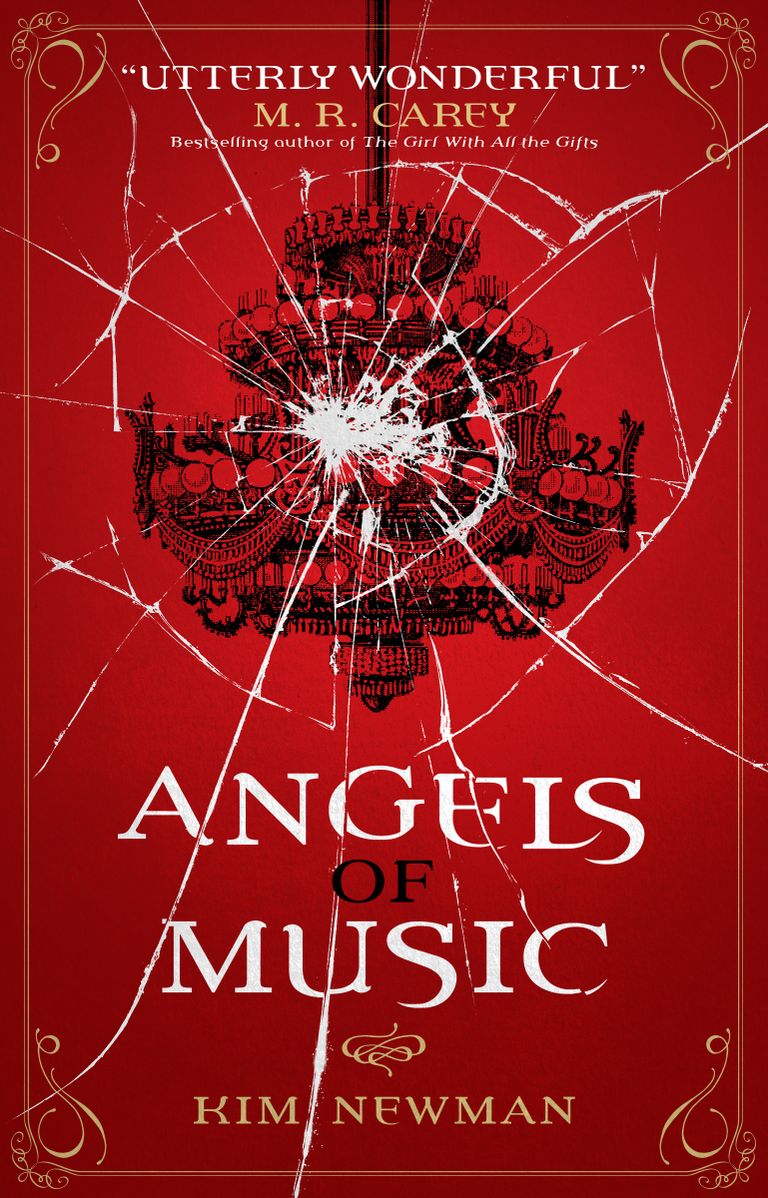 Kim Newman fans rejoice! We are unbelievably excited to reveal the cover of Angels of Music – a brand-new, standalone novel by the award-winning author.

Famous for the highly praised Anno Dracula series, Newman has brought us a fresh fantastical world to delight in! Taking root in the classic The Phantom of the Opera, Newman ushers in a host of iconic characters, plucked from the pages and screens of some of the 19th and 20th century’s most well-known literary and film creations and given his trademark modern, satirical twist:

Deep in the shadows under the Paris Opera House resides Erik the Phantom, mysteriously enduring through the decades as the mastermind behind a strange and secret agency. A revolving door of female agents are charged by wealthy Parisians and the French Government to investigate crimes and misdemeanours they would prefer to keep out of the public eye.

“A marvellous marriage of political satire, melodramatic intrigue, gothic horror and alternative history. Not to be missed.”

– THE INDEPENDENT on ANNO DRACULA

“Politics, horror and romance are woven together in this brilliantly imagined and realised novel. Newman's prose is a delight, his attention to detail spellbinding.”

– TIME OUT on ANNO DRACULA: THE BLOODY RED BARON

“Kim Newman’s mash up of vampire legend and alternate history is a compulsively readable, bitingly satirical version of the excesses of the 1980s.”

– FINANCIAL TIMES on THE HOUND OF THE D’URBERVILLES

Angels of Music publishes into the UK and US markets this October. Here is an exclusive extract from the magnificent Angels of Music:

Entr’acte: The Case of Mrs Norton

‘Irene Norton,’ said the woman who had sat at his table. ‘I’m a married lady, now.’

The Café de la Paix was busy, as ever. It was the hour when he accepted approaches. The Opera Ghost Agency had nothing much on, and the current Angels – Ayda Heidari, Ysabel de Ferre and Hagar Stanley – were idle. That was not good for them – or Paris.

He smiled to see Irene. She was, he admitted, one of his favourites.

But she was not expected.

‘Was there not an… understanding between you and M. Erik?’ prompted the Persian. ‘You were to confine your activities to other countries?’

‘I’m married. I’m through with activities.’

‘A fine point. Not one I would want to argue with our patron.’

Irene frowned. Her perfect mouth almost pouched into a moue.

She was older, of course. Everyone got older – with a few mysterious exceptions, like the Countess Cagliostro… and the Phantom of the Opera. Erik had stolen something from the Khanum which froze him in time.

It wasn’t just the tiny traceries around Irene’s eyes and the tighter corset. She was different. Her way of speaking was changed.

No longer an American eagle, she was an Englishman’s wife.

The Persian had followed her career, of course. Erik had him keep track of all the Angels, fallen or flown. Cuttings books were maintained. Irene had triumphed modestly as a singer, and immodestly as an adventuress. He knew of her liaisons with crowned and uncrowned heads, her coups in Europe and the Americas. She had amassed and lost several fortunes.

But all that was apparently done with. The cuttings book could be closed.

The Persian had been surprised to read notice in the London Times of her marriage to an English solicitor of no particular distinction.

That was that. Finis to Irene Adler.

Irene Adler had been the toast of Europe, a habituée of courts, palaces and great opera houses. Mrs Godfrey Norton would queen it over a villa in a London suburb. Irene Adler made demands of ambassadors and princes. Irene Norton would approve menus and keep an eye on the servants. Church on Sunday morning, and roast dinner on the table after.

And children. Lots of brats, taking after the father – handsome, but running to fat.

‘I am not in town to tread on toes,’ she said. ‘God – my husband – has taken a position in Paris. With Liddle, Neal & Liddle, the bankers. He doesn’t know about the understanding and, speaking plainly, wouldn’t understand it.’

‘The mists part,’ said the Persian. ‘You announce your presence and wish to petition for leave to stay?’

‘Mists be damned, Daroga. I wish to petition Erik… as a client.’