Q: How did you come up with the story for War of the Sons?

A: We knew from the start that we wanted to tell a big story-- something that couldn't be done on a TV budget and that was a little more complicated than a typical episode.  Rebecca and I tossed around a few ideas, all of them tied into the Apocalyptic story line of season five, but we kept coming back to 1950s New York as a setting.  I think Rebecca just wanted to dress Sam and Dean up in the period clothing.  Once we knew that, it was just a lot of research and brain storming to come up with something that was exciting and had enough twists and turns for a 300 page book.  The notion that the boys are after something in the 50s that no longer exists in the present struck me as the perfect time-travel story.

Q: Why did you decide to set this book after the episode ‘My Bloody Valentine’?

A: Sam and Dean are at a kind of emotional low-point at the start of the book, which was important for the story.  They've been dealing with the fallout of what Sam did in "Lucifer Rising" for months, and things keep getting worse and worse, and they're really no closer to stopping the Devil than they were at the beginning of the season.  When we find the boys in "War of the Sons," they're desperate and willing to take any risk to defeat Lucifer, which is how they get into the messed-up situation that they eventually find themselves in.

A: At the beginning, they were exactly the same!  In fact, some of the ideas we discussed were originally meant to be episode pitches, but we focused on the ones that were too huge to accomplish on television.  Also, because TV is such a collaborative medium, pitching an episode is usually about getting a kernel of a good idea, which Eric and Sera and all the writers then mold into the ongoing storyline of the show.  For "War of the Sons," the story had to be much more fully formed before it was approved.

Q: Leading on from the last question, when working on War of the Sons, in what ways was it liberating not having to worry about the technicalities of filming the story?

A: Without a line producer telling us what we could and couldn't afford, we looked at the story like it was a Supernatural feature film.  Bigger and crazier was the motto.  More action than we could ever do on the show, tons of locations, a lot of which are in New York City... along with a pretty huge cast of characters.

Q: If money was no issue, who would you cast as the guest stars in War of the Sons, if it was adapted into an actual Supernatural episode?

A: I worked on Battlestar Galactica before Supernatural, so I hadatee Sackhoff in mind when I was writing for Julia, who is sort of a foil to the boys in the story.  For Walter, a professorial sort of guy, I think a good choice would be John Noble, who coincidentally plays Walter Bishop on Fringe.  For Don, we had Joe Pesci in mind-- the kind of guy who looks at home in a dark bar.

Q: What are your responsibilities as script coordinator on Supernatural?

A: I work with the writers to keep track of the show's continuity, proof all the scripts and make corrections, handle any legal issues that come up with the scripts before we start shooting, and basically do anything the writers need to keep the show running smoothly. 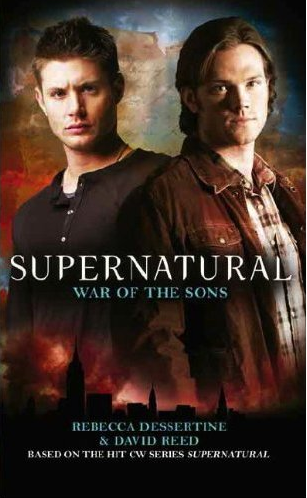 Twenty-three years ago, Sam and Dean Winchester lost their mother to a demonic supernatural force. Following the tragedy, their father taught the boys everything about the paranormal evil that lives in the dark corners of America… and how to kill it. On the hunt for Lucifer, the boys find themselves in a small town in South Dakota where they meet Don – an angel with a proposition… How far will the boys go to uncover the secret Satan never wanted them to find out?