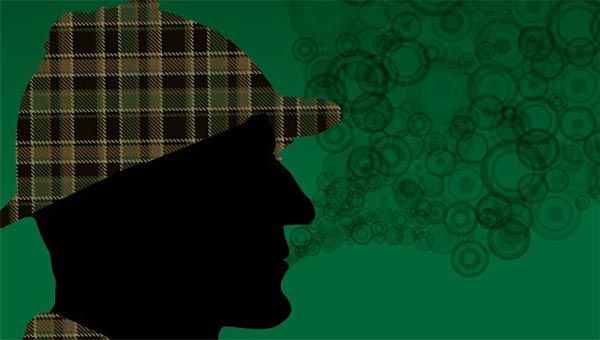 Holmes, as was often his wont, seemed to ignore our potential client. He stood at the fireplace, his back to where the man was seated, fiddling with his pipe or leafing idly through the various items of correspondence pinned to the mantel with a clasp knife.

For my part, I made a point of paying full attention and nodded encouragingly for the gentleman to continue. “Perhaps if you introduce yourself and tell us what brings you here,” I suggested.

The man’s inchoate smile was stifled by Holmes’s snort of amusement. “Really, Watson,” he murmured, “Mr Cooper need not waste his time on such obvious triviality.”

“For my benefit if not for Mr Holmes’s,” I said stiffly. “I for one did not overhear Mr Cooper introduce himself to Mrs Hudson on his arrival.”

“Neither did I,” Holmes said, turning abruptly and sitting down. He steepled his fingers together. “But for my friend and colleague Dr Watson’s edification, pray – tell us about the death. A relative, I assume.”

“My father,” Mr Cooper said. “But how could you know that?”

“I did not. As I said, it was an assumption. But the death worries you, no? Why else would you have come so far straight from the funeral? Your attire gives you away,” he explained. “Not least, the embroidered name visible in the collar of your coat when you handed it to Mrs Hudson just now. The work of Stimpsons of Argyle, if I am not mistaken. The stitching is quite distinctive.”

Not for the first time, Holmes’s deductions and observations seemed simple once explained. But Mr Alastair Cooper, as he now introduced himself, was evidently impressed.

Holmes shrugged off the man’s praise and admiration with a thin smile. “So tell us of this mysterious death that brings you from Scotland? Quite apart from the provenance of your coat, the ticket stub was in your hand when you arrived,” he added quickly.

The deceased was, as Mr Cooper had intimated, his father, and the death was indeed mysterious.

“My father, Sir Fergus Cooper, was not a young man, but I had not assumed I should inherit the estate for a good number of years yet. He was fit and healthy and making plans to redevelop parts of the estate on the slopes of Mount Snowtorn.”

The name “Snowtorn” sounded familiar, though I could not immediately place it.

“In what way ‘develop’?” Holmes demanded, stuffing tobacco into his pipe and bedding it down.

“Given the environment, the land is not arable, and the snows descend over a large part of the mountain for much of the winter, as they do now, so sheep farming is also problematic.”

“Hunting then,” Holmes said, lighting his pipe and puffing out a cloud of grey-blue smoke. “Go on.”

“Indeed. Father had plans to clear the few tenants remaining from the upper slopes of the mountain and convert their dwellings into hunting lodges which could be leased out.”

“And these tenants are happy to be evicted?” I asked.

Cooper nodded. “There are as I say only a few, and all on short-term leases. Most of the area is already used for hunting, so no one is actually being put out of their home. In fact, father was returning from one of the lodges that night, having visited a tenant whose twelve-month lease is about to expire. A young widow, she took the property while recovering from the loss of her husband. But I get ahead of myself.”

“Indeed you do,” Holmes agreed. “Tell us how your father died.”

Cooper drew a deep breath. “He was found on the mountain. His throat had been severed.”

But Cooper was shaking his head. “They want nothing to do with it.”

“Because, Mr Holmes, my father’s throat was not cut by any human hand.”

Holmes closed his eyes. “A hasty and undoubtedly erroneous conclusion. But nevertheless that is the first thing you have said which is of any real interest. Explain.”

“I wish I could, sir. It was I who found the body. Or, perhaps I should say, it was I who first reached it. As I explained, the mountain is snowbound at this time of year. Much of it is covered with woodland, but there is a wide, clear path that runs up to the summit. The Cooper Estate includes this path as well as much of the woodland – right as far as the railway.”

Holmes’s eyes snapped open. “I thought I knew the name – you refer to the Snowtorn Branch that links the main lines for Glasgow and Inverness, yes?”

“That is correct. But the railway is not connected to my father’s demise, for he was on that path which I described. One of the servants saw him at first light as she was collecting wood from the shed to lay the fires.”

“She saw his body lying on the mountain path?” I said.

Cooper nodded. “A long way up, but it was the only blemish on the white of the snow. We did not know who it was, of course. I had assumed father returned after I myself retired to bed. But when the servants woke me it was because my father was not in his room. His bed had not been slept in. So, of course, I knew…” His voice tailed off and I could see him fighting to control his emotions.

“My dear chap,” I said gently.

“Go on,” Holmes urged, oblivious to the man’s feelings.

“What? Oh no. Mr Greville, a friend of mine who lives locally, had also seen the body and called in at the house. So we made the journey together. It took some time to get to the body through the snow.”

“You say your father’s throat was cut?” I prompted.

“And why do you say it was not cut by a human?”

“There are…” Cooper hesitated, searching for the right word. “Legends. Stories. Tales of a creature that lives on the mountain. Of course,” he said quickly, “I set no store by such nonsense. I am a rational man, and do not easily give in to beliefs in a supernatural being that haunts the mountain, apparently envious of those who still have their own lives. A creature that preys on the living, an entity made of smoke and mist, conjured from the ether, leaving no sign of its passing save the death of its victims.”

“Yet I perceive that you have indeed given in to such beliefs,” Holmes said.

Cooper nodded slowly. “I do not know what else to think, Mr Holmes. When we found my father’s body, his throat was slit as I said. But he was utterly alone on the path.”

“You do not consider his suicide a possibility?” Holmes asked, tactful as ever.

Cooper shook his head. “It is easy, I know, to say that it was not in his nature though I do truly believe that. But if you want proof, Mr Holmes, how could he have cut his own throat without a knife or similar instrument? For nothing of that kind was found on or near the body. The police had the same thought and searched extensively.”

“Could he have thrown it away?” Holmes wondered. Immediately he shook his head, correcting himself. “But no, his throat was cut. He would not have had the strength or the time to dispose of the weapon properly. Unless he was close to the trees perhaps?”

“He was in the middle of the path between the areas of woodland. Perhaps twenty yards from the nearest tree.”

Holmes nodded his agreement. “And how can you be sure that no one else was present, or later disturbed the scene of the crime?”

It was a good point, as Holmes’s always were. “Someone else could have taken the knife away,” I realised. “Or slit his throat, come to that.”

“No,” Cooper said. “He was lying on his back in the snow. The undisturbed snow. Not only was there no one nearby, but the only footprints in the snow were my father’s own.”

There was silence for several moments as we absorbed this information. Then Holmes nodded as if he had expected exactly this. “Watson?” he prompted.

“Were your father’s footprints deep?” I asked, struggling to find a possible solution to this singular problem.

“Ah, good thought, Watson.” Holmes jabbed the end of his pipe at me. “You are suggesting that the killer was somewhat lighter in weight than the deceased Mr Cooper.”

“My father was not a heavy man,” Cooper told us. “But how is this pertinent?”

“In that case, perhaps it isn’t,” I admitted. “But I did wonder if the killer’s footprints were more shallow than your father’s and a fresh snowfall had obliterated them while leaving those of your father still in evidence.”

Cooper shook his head. “There had been no fresh fall since the previous day. In fact it did snow while my father was with Mrs Bennett, the widow I mentioned. Hence he walked back through the virgin snow, but his were undoubtedly the only footprints.”

“It could not have snowed during the night?” I ventured. “Without your noticing?”

Again Cooper shook his head. “Impossible. Because the blood from my father’s wound – and as a medical man Dr Watson you will appreciate that there was a lot of blood – was sprayed across the top of the snow, staining it as it sank in. Any fresh fall would have obliterated the stain. We have considered everything.”

“How far is it from the railway line that borders your estate to the point where your father’s body was found?”

The question seemed to surprise Cooper as much as it did myself. But my experiences with Holmes meant that I was able to conceal my surprise, and I assured myself that his question would turn out to have some relevance.

“About a mile, I suppose,” Cooper said after consideration.

“And am I right in thinking that some part of this line as it borders the estate was the location of the Snowtorn Line Robbery, as the newspapers have described it?”

The robbery had garnered headlines about nine months previously. A freight train bound from Inverness to Glasgow had been carrying a large shipment of gold bullion when it was deliberately derailed on the Snowtorn Branch, killing the driver and badly injuring his footplateman. The gold was never recovered, and Holmes had been amused by the various speculations about how the thieves managed to move such a weight and volume of the precious metal through the snowy wastes of the Scottish countryside.

“Are they any closer to solving that one?” I asked Cooper.

“Not to my knowledge,” he told us. “They did arrest a man soon after the event, as you probably know. Arvin Gunnarsson, I believe his name is. But the police were unable to connect him to the actual robbery.”

Holmes nodded. “He claimed he was paid to sabotage the track, but had no involvement in the robbery itself and was long gone when the thieves derailed the train. The authorities had to content themselves with a charge of damaging railway property. I believe Mr Gunnarsson is currently serving out an eighteen-month sentence in Glasgow.”

“You are better informed than I,” Cooper admitted. “So, Mr Holmes – will you take the case?”

Holmes sniffed and regarded his pipe with interest. “Oh yes,” he decided at last. “But I shall want to see the scene of the crime.”

“The spot where the body was found – of course.”

Holmes frowned. “Don’t be obtuse, man,” he snapped. “I mean the point at which the train was derailed.”