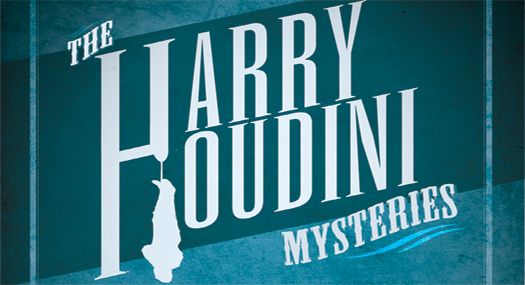 To celebrate the release of The Dime Museum Murders  and The Floating Lady Murder, here is an exclusive essay by Daniel Stashower, discussing how he transformed the most famous escape artist in the world into a master detective. 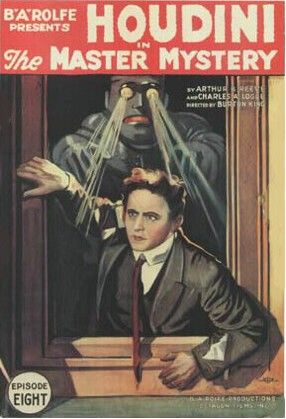 Harry Houdini was a man of many distinctions: magician, escape artist, showman and aviation pioneer. He may also have been the worst film actor of his generation. Nearly a century ago, in January of 1919, Houdini made his motion picture debut as Justice Department agent Quentin Locke in a 15-part serial called The Master Mystery. The movie was little more than a series of wildly implausible death-traps designed to showcase Houdini’s talent for “self-liberation,” as he phrased it. In one reel, he’s trussed up in barbed wire in the path of a stream of bubbling acid.  Another finds him hanging by the wrists, apparently helpless, only to use his bare toes to fish a key-ring from the pocket of a fallen adversary. He then coolly inserts a key into a door lock with his foot, swings the door open and scuttles up to loop his legs over the top -- gaining the slack he needs to free himself from his bonds.

In between the feats of derring-do, however, Houdini appears strangely inert. Once or twice he manages to register surprise -- flapping his eyelids as if signaling to a passing ocean liner – but otherwise he might as well be part of the scenery.  Even so, I was captivated. I first saw the movie at a magician’s convention when I was 13, and even then the idea of Houdini as a crime-solving adventurer made perfect sense. I loved stories about magicians who were also detectives. I never missed an episode of “The Magician” with Bill Bixby on TV. I plowed through stacks of mysteries by John Dickson Carr, Walter B. Gibson & Clayton Rawson, all of whom specialized in magic-themed “puzzle plots.” Still, for all my enthusiasm, I understood that certain liberties were being taken. Conan Doyle once wrote that the “great defect in the detective of fiction is that he obtains results without any obvious reason -- that is not fair.” The great defect of the magical detective, it seemed to me, was that he obtained results by snapping his fingers. If the villains had him trapped in a dark alley, he would snap his fingers and disappear. If a thug had the drop on him with a gun or knife, he snapped his fingers and the weapon transformed into a harmless feather or nosegay. Somehow this didn’t seem quite fair either. At the time I was struggling to master such basic tricks as Hippety-Hop Rabbits and the Multiplying Billiard Balls, but even I knew that you could snap your fingers until they bled, but that gun wouldn’t turn into a nosegay. Trust me on this.

When I began to write books featuring magicians as detectives, I wanted to play fair. Wherever possible, I tried to make the tricks plausible – stuff that would work in the real world -- and I based them on actual principles of magic. This presented an unexpected challenge when I began to write about Houdini. On the face of it, it would be hard to imagine a more natural detective. Houdini was a man of extravagant talents. He was an athletic marvel. He was a born showman. He had a gift for creating and solving puzzles. Had there been no real-life Houdini, this heady combination of fame, wealth and physical prowess would seem preposterous to the modern reader. But here was a man who made an elephant vanish, who escaped from strait jackets while dangling over Times Square, and who broke out of the world’s most secure prisons. The possibilities were endless.

Or so it seemed. I soon discovered that your average murder puzzle or kidnapping plot doesn’t exactly cry out for the skills of a “self-liberator.” Sure, you can have Houdini break out of jail after being unjustly imprisoned, but what next? I had trouble devising plausible situations, and my early drafts could not be called promising: “You have learned too much about my nefarious plans, Houdini. Therefore I am obliged to imprison you in this escape-proof strait jacket and dangle you over a threshing machine!”

At the same time, my gripe about so many other magician-detectives was that everything seemed to come too easily. Almost invariably, they had wealth, fame and an apparently limitless supply of useful tricks up their sleeves.  Ironically, Houdini actually did have wealth, fame and an apparently limitless supply of useful tricks up his sleeve. This combination of attributes, however pleasant in real life, didn’t leave much room for character development. The solution, it seemed to me, was to turn back the clock and set the series in the “poor and struggling” phase of Houdini’s career. Without the resources of wealth and fame at his disposal, the young Harry would have to rely solely on his talent and cunning, and this gave me some room to work. The older, world-famous Houdini would never get himself tossed into jail, or rub elbows with criminals, or break into a suspect’s house to look for clues. The young, fictional Houdini could do all of this and more.

I like to think that the real Houdini might have approved. “Those in the arrogance of their youth rarely listen to their elders,” he once wrote. “Experience is a hard school, but we must all learn in it and no other.”

Because, after all, you never know when you might find yourself hanging upside-down over a threshing machine.