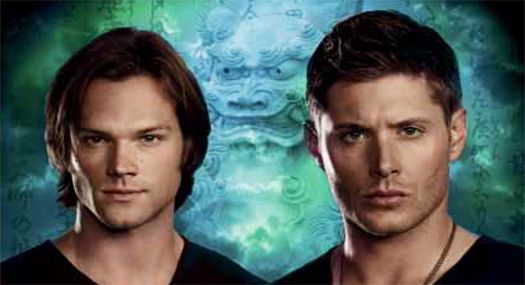 SUPERNATURAL - RITE OF PASSAGE (OUT NOW)
By John Passarella

Dean Winchester parked their latest beater—a rust-speckled blue and white Plymouth Duster from the mid-seventies that shimmied whenever the speedometer topped sixty miles per hour—a hundred yards downwind from the isolated Victorian house in upstate New York, then he and his younger brother, Sam, climbed out of the old car and eased the doors shut. Side by side, they strode up the deserted two- lane country road toward the dilapidated home. Dean cast anxious glances in all directions, careful to check the late- afternoon sky directly overhead. Sam looked from the scrap of paper in his hand to the sprawling home, pausing by a battered green mailbox atop a leaning wooden post with the three-digit house number painted in black on its side.

“Is this the place?” Dean asked.

“636 High Hill Road.” Sam nodded toward the paper in his hand. “That’s what the mailman gave us.” “It looks abandoned,” Dean commented. A gross

Twenty years ago, maybe ten, the beige Victorian, with bold green trim on the posts and railings of the wraparound first- and second-story porches, backed by a three-story octagonal tower topped by a widow’s walk, had probably been an impressive residence. But the intervening years had not been kind. Paint had faded and cracked, and wooden posts were split or missing, as if carted off by giant termites from a lost Roger Corman film. Gaps between wispy, moth-eaten curtains behind flyspecked windows revealed uninviting darkness within.

“I guess they don’t entertain much,” Sam said quietly as they approached the front door.

Before Dean climbed the porch steps, Sam caught his arm and pointed downward.

A greasy gray feather lay on one warped step.

As they crossed the porch, the wooden planks creaked under their weight. So much for the element of surprise, Dean thought. He knocked, waited in vain for an answer, and knocked again, louder. He shot a glance at his brother. Sam shrugged. For a silent moment, Dean debated picking the lock versus kicking in the door or putting an elbow through a window, but was spared the decision when an irritated voice shouted, “Go away!”

Sam and Dean had spent a week investigating multiple disappearances in the Adirondacks. The victims had been young and old; several solitary joggers, a night shift worker on a smoking break, a woman walking her Pomeranian, a camper who wandered off to answer a call of nature, an insomniac who stepped out on his balcony for some fresh air, and a hiker who had left his group for a more challenging ascent. All the victims had been out alone after dark. Otherwise, no similarities, no pattern an FBI profiler would ever unravel. Families received no ransom calls or notes. No bodies were found. There were no witnesses. No fresh tire tracks or suspicious vehicles lurking in the area of the disappearances. It was as if the victims had vanished off the face of the earth.

That had the Winchesters—who often found answers outside the box—wondering if someone or, more likely, something had, literally, lifted them off the earth. Sam had made the suggestion first. Dean wondered if they were dealing with dragon abductions again, but fellow hunter Bobby Singer noticed a dark, grimy feather on the side of the road near where the police had found the cowering Pomeranian. Return trips to several of the crime scenes turned up a few more feathers.

After reviewing the timeline, they determined that the first disappearance—a jogger—occurred shortly after the arrival in town of three odd women, the Yerakidis sisters. Their behavior bordered on reclusive, but on rare occasions they would appear in town for supplies, always together, wearing bulky, hooded cloaks, no matter the weather. They talked to one another, heads bobbing together in brief intimate exchanges, but rarely spoke to anyone else. According to clerks in stores they patronized, they seemed to lack social skills, resisting attempts by anyone to engage them in casual conversation.

“Go! Away!” the shrill voice repeated.

Dean raised his fist to knock on the door, but paused when it was yanked open.

The hooded head of a woman with a pinched face darted forward through the foot-wide gap in the doorway, as if she meant to bite Dean. She had black marble eyes over a hooked nose and a wide, almost lipless mouth.

“Last warning,” she squawked, her words punctuated with a blast of foul breath.

Before Dean could utter a reply, she slammed the door in his face.

They heard the deadbolt click, followed by an eerie silence.

The combined force of their kicks smashed the deadbolt free of the weathered doorjamb and the door burst open, rattling on rusty hinges. Pulling their automatics, they entered the house, backs to each other as they sighted along the muzzles of their pistols.

A mixed bag of threadbare and damaged furniture cluttered the first floor. Boxes lined the walls, stacked high enough in places to block several windows and cast the rooms into unnatural gloom. Everything looked as if it had been abandoned by the prior tenants.

A cloaked figure pitched toward him.

He held his fire at the last moment, recognizing an empty cloak draped over a coat rack. But who had—

Behind him, Sam’s gun roared.

There was another blur of movement as something swooped toward him from the stairwell landing. His own shot missed as it crashed into him, knocking him over the back of a grimy sofa onto an oval coffee table that collapsed under his weight, taking Dean’s breath away.

In the fall, Dean had lost his gun. Expecting an immediate follow-up attack, he rolled to the side and grabbed a detached table leg to wield as a makeshift club. Instead, the wooden leg became a crude shield as one of the sisters hurled a crumbling cardboard box filled with hardbound books at him.

Across the room, Sam ducked and leaned away from a flurry of claw swipes by a second sister. He got off another wild shot before she caught him off balance and hurled him against an empty hutch. As he staggered away, she dumped the hutch on top of him, then whirled on her heel and bolted up the stairs.

From above, the first one shouted, “Hurry, Te!”

Before Te turned the corner of the first landing, Dean caught a glimpse of long wings, folded behind her back, extending from her shoulders to her calves. He hurled the table leg at her—but a moment too late. It gouged a divot out of the drywall and rebounded down the stairs while Dean recovered his gun.

Dean bounded up the stairs, two at a time. Behind him, he heard the hutch crash as Sam climbed out from under it. Though the second floor was darker than the first, Dean’s eyes had adjusted to the interior gloom. He dodged a padded bench in a hallway, following a rush of clicking footfalls on hardwood. As Sam thundered up the staircase behind him, Dean ducked through a doorway into the tower section of the house, and glimpsed a flutter of movement as one of the sisters rushed up a wrought-iron spiral staircase.

By the time he burst through a trapdoor onto the widow’s walk, enclosed by a chest-high wrought-iron railing, he stood alone. He checked the sky, turning in a slow circle, gun raised, as Sam joined him. A moment later, they heard the unmistakable sound of a car engine starting. A green Chevy Suburban pulled away from the back of the house, spewing gravel until it fishtailed onto the country road and roared back the way the Winchesters had come.

Dean stared down at the three-story drop and rattled the wrought-iron railing in frustration.

By the time they descended two flights of stairs and sprinted the hundred yards to the Plymouth, the harpies were long gone. To add insult to injury, one of the car’s worn tires was flat. Sam volunteered to replace it while Dean checked the house for any clues to the sisters’ destination. Other than the abandoned cloaks they had worn to hide their wings and scattered feathers littering the premises, he found nothing of interest. Until he opened the refrigerator. On the top shelf sat several translucent plastic containers dappled with dried blood and carefully labeled with strips of masking tape to identify the contents: liver, kidneys, lungs, brains. Off to the side, a mason jar held a selection of human eyeballs, shriveled optic nerves still attached. With a pained expression, Dean shoved the door closed. He would never look at pickled eggs the same way again.

As he hurried back to the Plymouth, he called Bobby on his burner cell. “It was them, Bobby,” Dean said. “The Yerakidis sisters are harpies.”

“Not exactly,” Dean said. “They lit out of here in their green Suburban.”

They guessed the third harpy would join the other two, but had no idea where they might meet. To cover more ground, they searched separately, with Dean and Sam in the Plymouth and Bobby on the other side of the small town searching for the Suburban in his Chevelle.

Shortly after nightfall, Bobby spotted the SUV and tailed it to a foreclosed house, waiting at a discreet distance until the Winchesters could provide backup. They joined him by a sign planted in the corner of the front lawn that read “Foreclosure. Price Reduced.”

“Or the jogger?” Sam wondered.

“Not a damn peep,” Bobby said, nodding toward the house. “Waiting in the dark.”

“To hell with bumbling in the dark again,” Dean said. “Let’s torch the place.”

“What if the third one brought the jogger here before the other two arrived?”

Dean recalled the plastic containers in the fridge. “The poor bastard might thank us,” he muttered.

Dean followed his gaze to the peak of the gable roof. At first he saw nothing in the darkness. Then two hunched shapes resolved, silhouettes darting with eerie grace toward the edge of the roof. First one, then the other launched from the roof, broad wings spread and pounding against the air. In seconds they soared over the road and higher, over the treetops of the forest on the other side, and vanished.