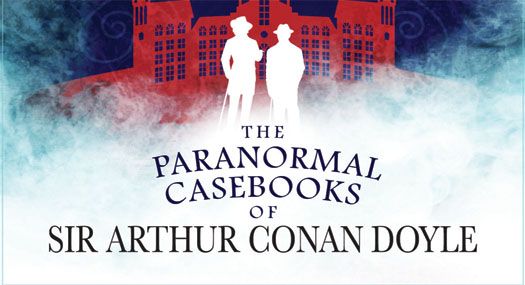 An in-character interview with Vaughn Entwisle (The Revenant of Thraxton Hall) as Arthur Conan Doyle.

Do you regret killing off Sherlock Holmes?

If you’d asked me that question during the great kerfuffle that followed the publication of “The Final Solution,” (in which Holmes met his heroic death at the Reichenbach Falls) I might have given a different answer. But the honest truth is: no, I never regretted the decision. As a writer I wanted to cast my net wide and explore new characters and new genres: ghost stories, historical adventures, speculative fiction about lost worlds and scientific discoveries. Holmes was a great financial and artistic success, but his popularity had become a ball and chain.

After I “killed off” Holmes my imagination was set free to follow my muse wheresoever she led. I love chivalry and wrote a number of historical adventures such as Micah Clarke (set in the Monmouth rebellion of 1685) and The White Company (about a band of archers fighting in the 100 years war between France and England).

I was also a great admirer of the French author Jules Verne and wrote a number of my own Scientific Romances. For these novels, I invented a scientist hero, Professor Challenger, and incorporated the latest scientific theories. In The Poison Belt, the earth passes through a cloud of poisonous ether. In The Lost World, Professor Challenger explores a plateau in South America still populated by dinosaurs. I am especially proud of my short story, The Disintegration Machine, in which I out-Verne Verne by creating a prototypical matter transporter.

All in all, I am happy to look back upon a prolific career, during which I penned ripping yarns spanning the genres of historical fiction, mystery, science fiction, fantasy, adventure and ghost stories, as well as poetry and serious works of non-fiction.

What do you think of the various televisations/film adaptations of your works? Which one is your favourite?

All writers hope their work will live on. But, in all honesty, I never expected that the public would be so enamoured of my little detective fictions that they would still be enormously popular nearly a century after my death. Of course, I am immensely flattered by and proud of all the adaptations. That said, if I had to select just one I would choose the BBC version starring that young fellow with the amusing name. What’s he called again? Englebert-something . . . no . . . no wait . . . Cumberbatch, that’s it: Benedict Cumberbatch. (Wish I’d thought of that outrageous moniker for one of my characters.) I am also very impressed that those clever BBC writers Steven Moffat and Mark Gatiss managed to remain true to the essence of my nineteenth century stories while updating them to twenty-first century London. Dashed ingenious, I’d say!

Do you identify more with Watson or Holmes..?

Watson, obviously. The problem I quickly identified in writing about Sherlock Holmes is that the writer/reader cannot inhabit the mind of a genius. Like myself, Watson is the pedestrian intellect that merely observes and records the machinations of an infinitely superior mind. If I say so, I think it’s a conceit that works brilliantly well. I shouldn’t wonder if other writers copy the formula.

Who is your favourite fictional character? Apart from Sherlock, of course?

I am fond of Professor Challenger, although I deliberately made him somewhat unlikeable. If I had to pick just one, I would plump for one of my most amusing characters: Brigadier Etienne Gerard, a Hussar fighting in the French Army during the Napoleonic wars. These stories allowed me to throw a little humour into the mix as well as derring-do. I deliberately made Gerard a slightly ridiculous character, although still very brave. If you haven’t read any of the Brigadier Gerard stories, I do hope you will give them a fair shout

Have you ever been involved in a real - life mystery?

I am proud to say, yes! Several, in fact. I helped exonerate George Edalgi, a young lawyer falsely accused of writing hate letters and mutilating horses; and in another case, Oscar Slater, a gambling den operator wrongly accused of bludgeoning an old woman to death. I also helped bring to the public mind the mysteries of the Mary Celeste and the Cottingley fairies (although I probably shouldn’t dwell too much upon the latter). Through my connections with Spiritualism, I explored the greatest mystery of all: death and the afterlife. And seeing as here I am answering your questions, eighty-four years after my passing, I think we should all admit that I had it bang on all along.