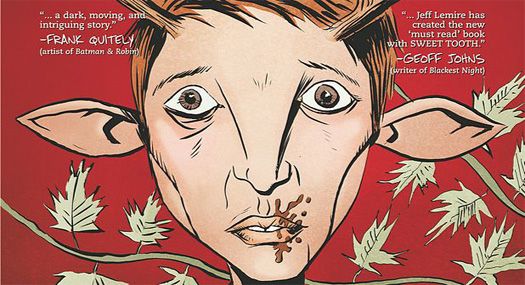 We were so excited by that the publication of both Sweet Tooth: Out of the Woods (Vol.1) and the paperback of The Nobody this month, that we couldn't resist having a chat with the brilliant Jeff Lemire.

I’ve heard that the premise for Sweet Tooth arose from a dream that you had about a boy with antlers. Is that right?

No, actually that’s not true. I’ve never heard that before. I actually just started drawing this little kid with antlers in my sketchbooks one day, and the story sort of sprung up around him over time. I wish I had dreamt it though, that would have been a better story!

There have been lots of comparison between Sweet Tooth and Cormac McCarthy’s The Road, but your story reminds me of Margaret Atwood’s Oyrx and Crake. Do you think that there is something about Canadian culture/history that lends itself to inspiring great post-apocalyptic stories?

I do think there is a link there. The Canadian landscape can be very sparse, and very harsh and unforgiving in the winters. I’m sure that has influenced the tone and setting of Sweet Tooth. I primarily keep the characters out in the wild, in big open spaces.

Sweet Tooth has received great critical acclaim - and been a big hit with both traditional comics and indie fans - why do you think this is? Why does it have such broad appeal?

Well, I think the character of GUS is a very easy character to like and root for, because by his very nature he is completely innocent. There is nothing cynical about him. It’s hard not to root for him. Then you take that and contrast it with a harsh and terrible world, embodied by Jepperd and there is a real tension there.

What would you say have been the main comics/film/literary influences on Sweet Tooth? and your work generally?

The Essex County and The Nobody are black and white – why did you choose to use a colourist for Sweet Tooth? Did you choose Jose Villarrubia yourself?

I did choose Jose. We are friends and in my opinion there isn’t a finer colourist in the comics world. He is a true artist and brings so much personality and creativity to his work. He doesn’t just fill in the shapes with colour, he paints the page. And my artwork is pretty idiosyncratic, and he really gets me, and knows how to handle my line work.

Sweet Tooth (The Nobody and The Essex County) are set in the countryside. Why is this? Do you think this makes your work unique in comparison to other metropolitan based stories?

I just prefer to tell rural stories. The landscape reflects the kind of characters I like to create and the way I like to tell stories, slow and sparse. Plus, there are already so many comics and stories set in cities and urban centres…I like giving a different point of view with my work.

I think you use really strong and believable narrative voices in your work (such as little Gus and Vicky from The Nobody), do you think this is one of the things that make your work so engaging and powerful?

I try not to over-write. I try and only say what needs to be said and let the images tell the rest. In my experiences, people rarely say what’s on their mind. I let the setting and imagery fill in the blanks.

You often have an older companion to your young protagonist, such as Griffin and Jeppard. I believe Jeppard is going to become more complex as the story develops. Can you tell us a bit more about his character?

He is Gus’ opposite in every way. Gus is pure innocence. Jepperd is all the hate and violence and regret of this world personified. As the story progresses these two will influence and change each other. I love putting complete opposites together like that. It creates real dramatic tension, and gives each character somewhere to go.

Sweet Tooth and The Nobody are both such as moving stories – I cried on the tube - do you set out to make your stories so emotive?

I like to tell stories that make people feel something. It takes too long to make comics to just do frivolous or throwaway work. I’m trying to create real emotion on the page.

We’re big fans of Sweet Tooth over here at Titan, can we rest assured the series is ongoing for the foreseeable future?

It is safe and sound, and Gus and Jepperd’s tale will be a long and hopefully satisfying one.

If a Sweet Tooth-like plague swept the world, what would your survival plan be?

Are you excited about your work on Superboy? What’s going to be new about your version of the character?

I really want to focus on Smallville and what that means to Superboy. Both the physical place and its history, and the people who live there and surround him. I want to do a true RURAL superhero story. I want to use the mythos of Superboy to explore both the light and dark side of small town life in America.

My run will have more mystery and a darker edge to it.

Jeff Lemire is the cartoonist behind the Eisner-nominated ESSEX COUNTY TRILOGY, THE NOBODY and the ongoing Harvey Award nominated series SWEET TOOTH. Jeff is currently writing the upcoming SUPERBOY series for DC Comics