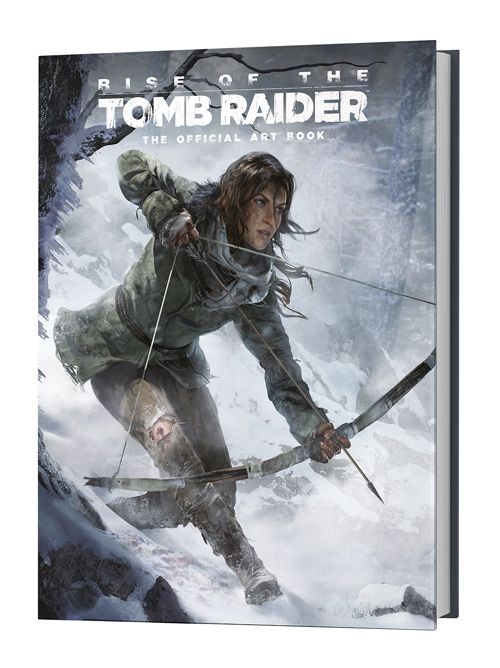 Rise of the Tomb Raider®: The Official Art Book is the perfect companion to Lara’s new adventure, taking readers on an all-access journey into the heart of the newest game in the critically and commercially acclaimed Tomb Raider® franchise.

Presented in a beautiful hardcover edition and featuring full color concept art, 3D renders, sketches and more, this book showcases the amazingly detailed characters, weapons and equipment, as well as the hostile environments found in Lara’s first Tomb Raiding expedition. Published in partnership with Crystal Dynamics®, and with detailed developer commentary, Rise of the Tomb Raider: The Official Art Book is the ultimate behind-the-scenes look at never before seen art from Rise of the Tomb Raider, and the only official art book.

Featuring epic, high-octane action moments set in the most beautiful yet hostile environments on earth, Rise of the Tomb Raider delivers a cinematic survival action adventure where you will join Lara Croft on her first tomb raiding expedition as she seeks to discover the secret of immortality.  Rise of the Tomb Raider launches November 10.

Andy McVittie has worked in the video games industry for more than twenty years, writing and editing for magazines such as Nintendo Official Magazine and PlayStation Plus.

The TOMB RAIDER franchise has sold over 42 million copies worldwide and inspired one of the most successful video game film adaptations in history, grossing over $300 million at the global box office with protagonist Lara Croft becoming a contemporary global icon. TOMB RAIDER, released March 5, 2013 has received over 70 “Best of” nominations and is the fastest selling game in the history of the franchise with nearly 9 million units sold. TOMB RAIDER: DEFINITIVE EDITION released January 28, 2014 and is one of the highest rated games on next generation systems. All of this has made TOMB RAIDER once again a destination brand for action-adventure.