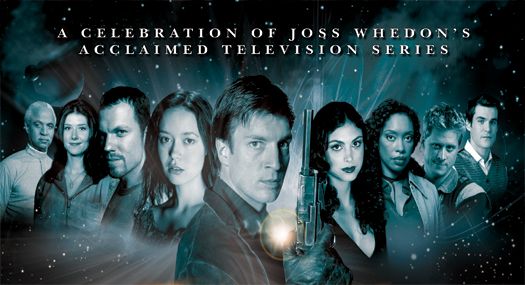 In this exclusive interview, we speak with Jose Molina about his work as a screenwriter and his brand new Firefly short story called 'Take The Sky' (found in Titan's Still Flying book)

When did you decide to become a screenwriter and what was your first script?

I've wanted to be a writer since I was a kid -- maybe as far back as age ten or twelve.  I figured I'd write short stories and novels and somehow eke out a living while I wrote, possibly as a teacher.  I happened upon screenwriting completely by accident.  During my junior year of college, I was a class short of filling out my schedule, when I found out about a seminar opening up literally fifty yards from my dorm room.  Now, screenwriting isn't something that comes across your radar AT ALL when you're living in Puerto Rico, but I figured I'd take the class as a lark.  I immediately fell in love with the medium and realized all those years of memorizing movies and TV shows could actually come in handy.

As the Executive Story Editor on Firefly, what were your responsibilities?

The responsibilities of an ESE aren't much different than those of a staff writer or Story Editor.  It's more a title than a job description.  A staff writer implies that you're the greenest member of the staff who has yet to prove him/herself.  Staff writers get paid a weekly salary and don't get additional money when they write a script.  Story Editors get paid for scripts; the implication is that you've shown you can hack it on a staff and have earned your first stripes.  ESE is the last rung in the ladder before you become a co-producer and have to start contributing to actually PRODUCING your script and bringing it to life.  It's the last "low-level" rank on a staff, and the place where you really need to start learning how to produce.  Although your focus is still writing, you're usually invited to participate in different parts of prep (like casting), production (being on set) and post (like editing).

You wrote the Firefly episode ‘Ariel’ by yourself but collaborated with Ben Edlund on ‘Trash’. How would you compare the two writing experiences and do you prefer working alone or with a co-writer?

It depends, but usually I prefer to write by myself.  Usually, when you write a script, you have a certain attachment to the story and you want to protect every word and every scene and make it your own.  There are times during a season where you just don't have that luxury and you have to split a script with someone else in order to get it done on time.  That means giving up a lot of authorship and ownership, which can be both frustrating and liberating.  But when you're trying to land planes that are coming fast and furious, you can't be precious about how pretty the landing is.

I've been very lucky in my career, however, in that I've only ever had to co-write with writers I respect and admire.  Edlund, David Zabel, Moira Kirland, Greg Walker, etc.  I would imagine that collaborating with someone who doesn't (or can't) pull their weight would be incredibly frustrating.

Were there any storylines that you were disappointed not being able to explore, once Firefly was cancelled?

The one I wanted to do most was this: after a day where sexual tension is running rampant -- between Mal and Inara, Wash and Zoe, Kaylee and Simon -- River decides she needs some empirical data on this whole "sex" thing.  So she goes to Jayne -- the sex machine -- to collect her data.  For her, it's nothing but a scientific experiment, to everyone else (Jayne included), it's an abomination.

I think Joss wanted to punch me in the neck for that one, but I had that thing half-broken and I think it would've been both hysterical and poignant.

Who was your favorite character to write dialogue for in Firefly?

They were all pretty great, but I'd have to go with Mal, Jayne or River.  If I had to pick one, I'd probably go with Jayne.  Mal was a big damn hero, but he was first and foremost a human being, so you could write him bombastic or cool or scared or whatever -- he was REAL.  River was like a piñata -- you never knew what was going to come out of her, and that was all kinds of fun.  Genius?  Crazy?  Bible redactor?  Mary Poppins?  Pick your day.  Jayne, however, had the gift and the curse of having absolutely no filter -- like Cordelia Chase in some ways, there were no speedbumps between brain and mouth, and the way in which he said the horrible truths he believed were always high-larious.

How did it feel to revisit Firefly with your ‘Take The Sky’ story in Still Flying?

It was pretty phenomenal.  It provided much needed closure after the awful rug-pull that was the show's cancellation.

While Firefly’s run on TV was short lived, it is still extremely popular and has one of the most dedicated fan bases in the world. How would you describe the show’s appeal?

I think if you look at most successful TV shows, you'll find that their casts are like families -- to each other and to the viewers.  Firefly was very much that family, dysfunctional and weird and angry and damaged, but very much bound together by their feelings to each other.  Even Jayne has that great moment in the pilot when he's looking in through the infirmary window after Kaylee gets shot (making sure no one sees him, of course).  I could go on and on about the myriad other things that I think make it special, but I think that's the most important aspect of it.

Your Wikipedia page says you successfully applied for a student internship with the Academy of Television Arts & Sciences by submitting a spec script for Star Trek: The Next Generation. What was the plot of this script?

It was called "Endangered Species" and was written in the middle of S6 (before Lore came back as the leader of the Borg).  He seeks out Data and the Enterprise because he wants to return to him the emotions chip he stole in the episode "Brothers."  In exchange, he wants Data to deactivate him.

Christina Hendricks is now well-known as Joan in ‘Mad Men’, but Browncoats of course know her as Saffron (or Yolanda, or Bridget..!). When you set about writing Trash, was it your idea to bring her back, or had her recurrence already been talked about? Do you think we’d have seen her again had the series continued?

The staff talked about bringing Christina back the minute we saw her in dailies.  We talked about a bunch of different ideas, including the possibility of making her a regular in order to throw some gasoline on the Mal/Inara relationship.  If the show had continued, we would've DEFINITELY tried to bring her back as often as possible.  I remember suggesting that Mal should rent out the second shuttle to Yo-Saf-Bridge.  How much fun would that have been?

In comparison to the rural worlds of Jaynestown and Heart of Gold, your episodes give us a look at the cityscapes of Ariel, and Haymar’s futuristic estate in Trash. Is this technologically advanced side of the ‘verse of particular interest to you? And are there any particular influences that you drew on when writing the worlds?

Of the staff, I was probably the most hardcore fan of traditional SF -- from Star Wars to Star Trek on down the line.  I was also the least knowledgeable about the western genre, so I think assigning me to write those episodes was a conscious decision from Joss and Tim to let me write to my strengths.  I love westerns, and would've pushed to get more "traditional" episodes if we'd made more, but it made sense to assign me the more science-ficitony stories and take advantage of (for instance) Brett Matthews' encyclopedic knowledge of westerns on "Heart of Gold."

In terms of influences, there's more Oceans 11 in "Ariel" than anything else that comes to mind.  At that time, I was also a big fan of Alias, so that was definitely in my head as I wrote the voice-over scene where Simon lays out the plan while we see different parts of it executed.