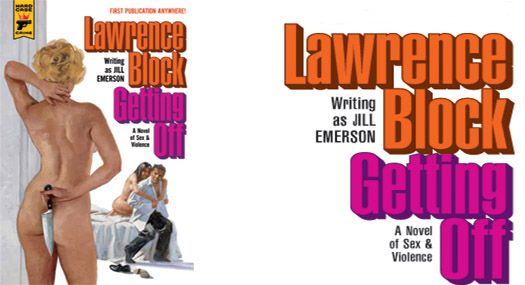 Lawrence Block:  Well, where to begin?  Let me say I understand you have a book coming out in September, and—

JE:  We have a book coming out in September.  Getting Off, published by Hard Case Crime.  By Lawrence Block writing as Jill Emerson.  That’s what it says, right there on the cover.

JE:  Lot’s bigger.  My name’s in small type, the same size as the subtitle.  You remember the subtitle?

JE:  There you go.  Lawrence Block, big as a house, and then Jill Emerson and Sex and Violence, all in teensy weensy letters.

LB:  It was the publisher’s idea.  In fact I had to fight to get your name on the cover at all.

JE:  What’s the problem?  Your publisher doesn’t like girls?

LB:  Look, it’s a purely commercial consideration.  I wasn’t going to bring this up, but you haven’t been very active lately.

JE:  It had its moments.  And I followed it with A Week as Andrea Benstock, a literary mainstream novel that got serialized in Redbook.  Not bad, huh?

JE:  Okay, I’ve kept a low profile.  But whose fault is that?  “Lawrence Block writing as Jill Emerson.”  But after 1975, you never put my name on anything.  I mean, this interview is cute and all, but when you come right down to it, what am I?

JE:  An aspect of self, wouldn’t you say?

LB: (musing)  An aspect of myself.  My inner lesbian.

LB: Bye?  What’s that about?  Where are you going?  Was it something I said?

LB:  What, suddenly you’re into guys?

JE: You think you’re smart, don’t you?  So fucking smart.

LB: If you wanted to keep it a secret why did you dedicate a book to him?  A Madwoman’s Diary.  “To John Warren Wells, a Jack of all trades and master of me.”

JE: Why do you have to be so cruel?

***
To read the rest of this interview, head over to Alison Kent's Blah Blog here.