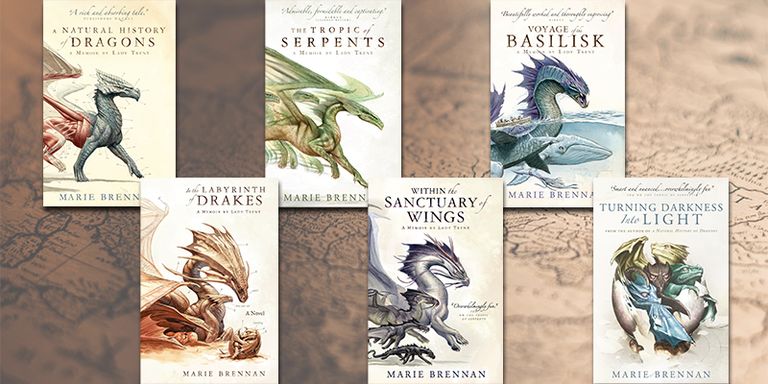 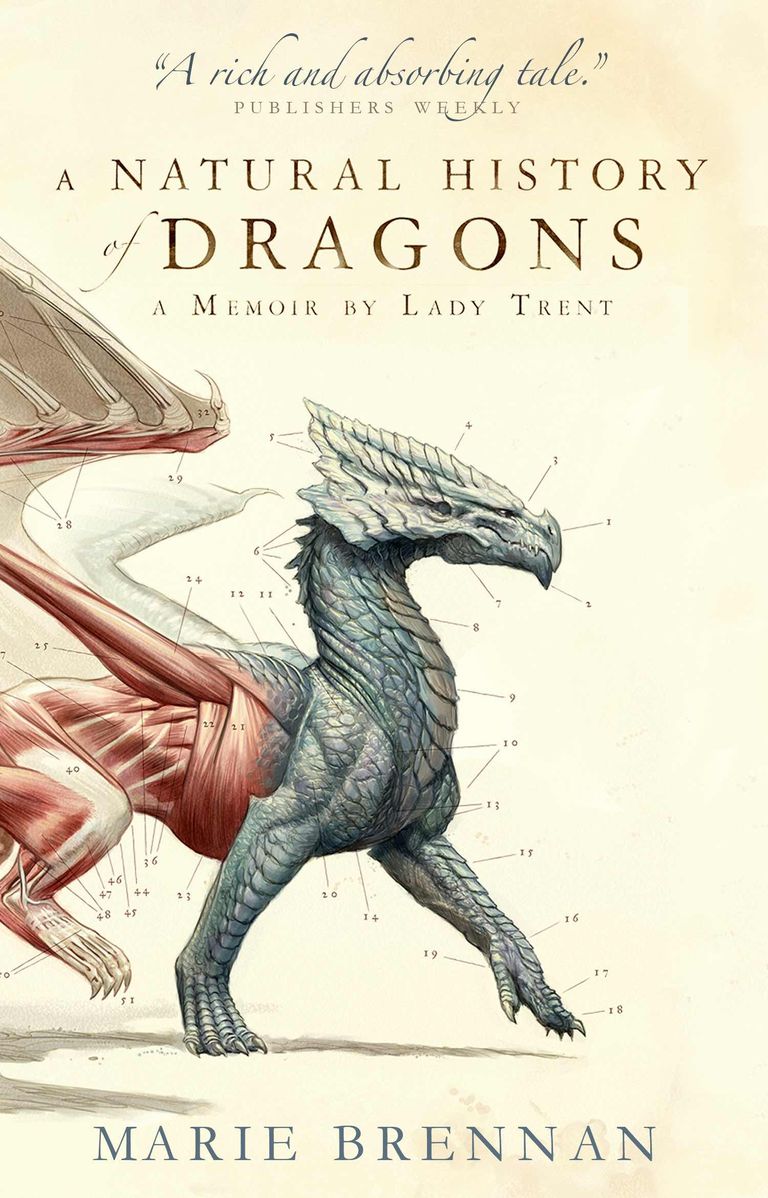 A Natural History of Dragons: A Memoir by Lady Trent

All the world, from Scirland to the farthest reaches of Eriga, know Isabella, Lady Trent, to be the world’s preeminent dragon naturalist. She is the remarkable woman who brought the study of dragons out of the misty shadows of myth into the clear light of modern science. But before she became the illustrious figure we know today, there was a bookish young woman whose passion for learning, natural history, and, yes, dragons defied the stifling conventions of her day. Here at last, in her own words, is the true story of a pioneering spirit who risked her reputation, her prospects, and her fragile flesh and bone to satisfy her scientific curiosity; of how she sought true love and happiness despite her lamentable eccentricities; and of her thrilling expedition to the perilous mountains of Vystrana, where she made the first of many historic discoveries that would change the world forever. 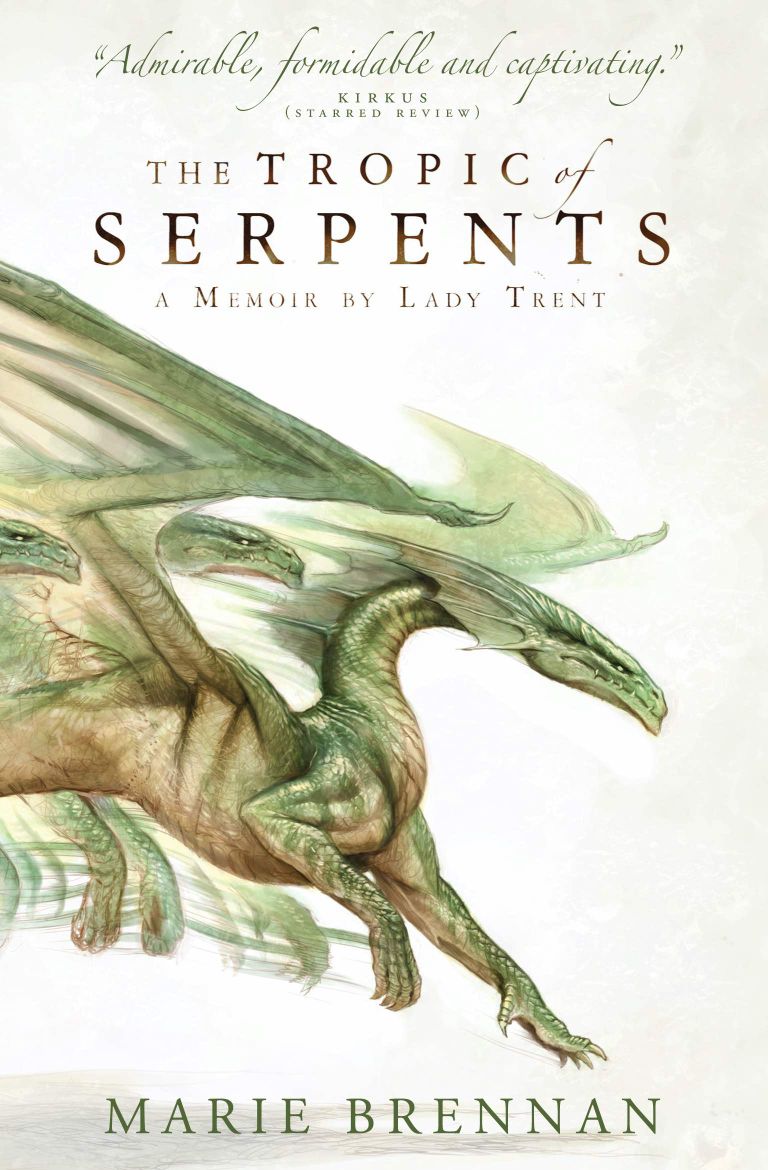 The Tropic of Serpents: A Memoir by Lady Trent (A Natural History of Dragons 2)

Three years after her fateful journeys through the forbidding mountains of Vystrana, in which she lost her husband, the widowed Mrs. Camherst defies family and convention to embark on an expedition to the savage, war-torn continent of Eriga, home of such exotic draconian species as the grass-dwelling snakes of the savannah, arboreal tree snakes, and, most elusive of all, the legendary swamp-wyrms of the tropics.

The expedition is not an easy one. Accompanied by both an old associate and a runaway heiress, Isabella must brave oppressive heat, merciless fevers, palace intrigues, gossip, and other hazards in order to satisfy her boundless fascination with all things draconian, even if it means venturing deep into the forbidden jungle known as the Green Hell – where her courage, resourcefulness, and scientific curiosity will be tested as never before. 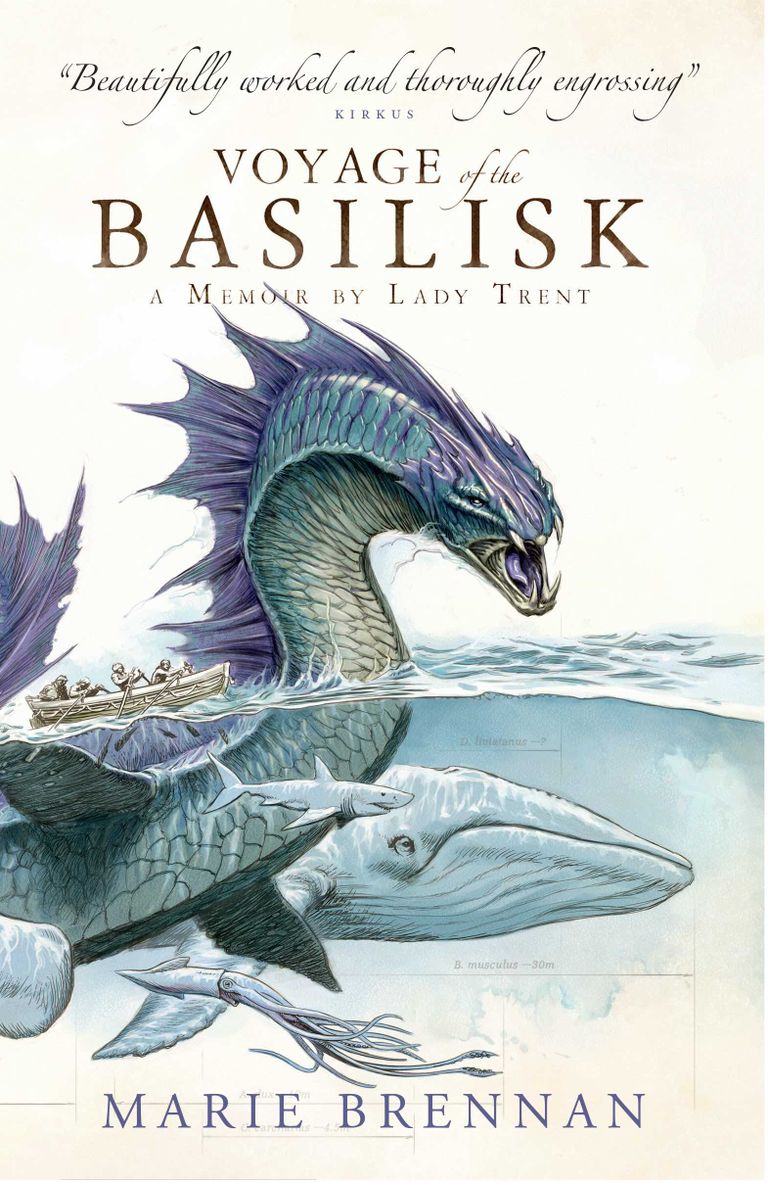 Voyage of the Basilisk: A Memoir by Lady Trent (A Natural History of Dragons 3)

Devoted readers of Lady Trent’s earlier memoirs, A Natural History of Dragons and The Tropic of Serpents, may believe themselves already acquainted with the particulars of her historic voyage aboard the Royal Survey Ship Basilisk, but the true story of that illuminating, harrowing, and scandalous journey has never been revealed—until now.

Six years after her perilous exploits in Eriga, Isabella embarks on her most ambitious expedition yet: a two-year trip around the world to study all manner of dragons in every place they might be found. From feathered serpents sunning themselves in the ruins of a fallen civilization to the mighty sea serpents of the tropics, these creatures are a source of both endless fascination and frequent peril. Accompanying her is not only her young son, Jake, but a chivalrous foreign archaeologist whose interests converge with Isabella’s in ways both professional and personal.

Science is, of course, the primary objective of the voyage, but Isabella’s life is rarely so simple. She must cope with storms, shipwrecks, intrigue, and warfare, even as she makes a discovery that offers a revolutionary new insight into the ancient history of dragons. 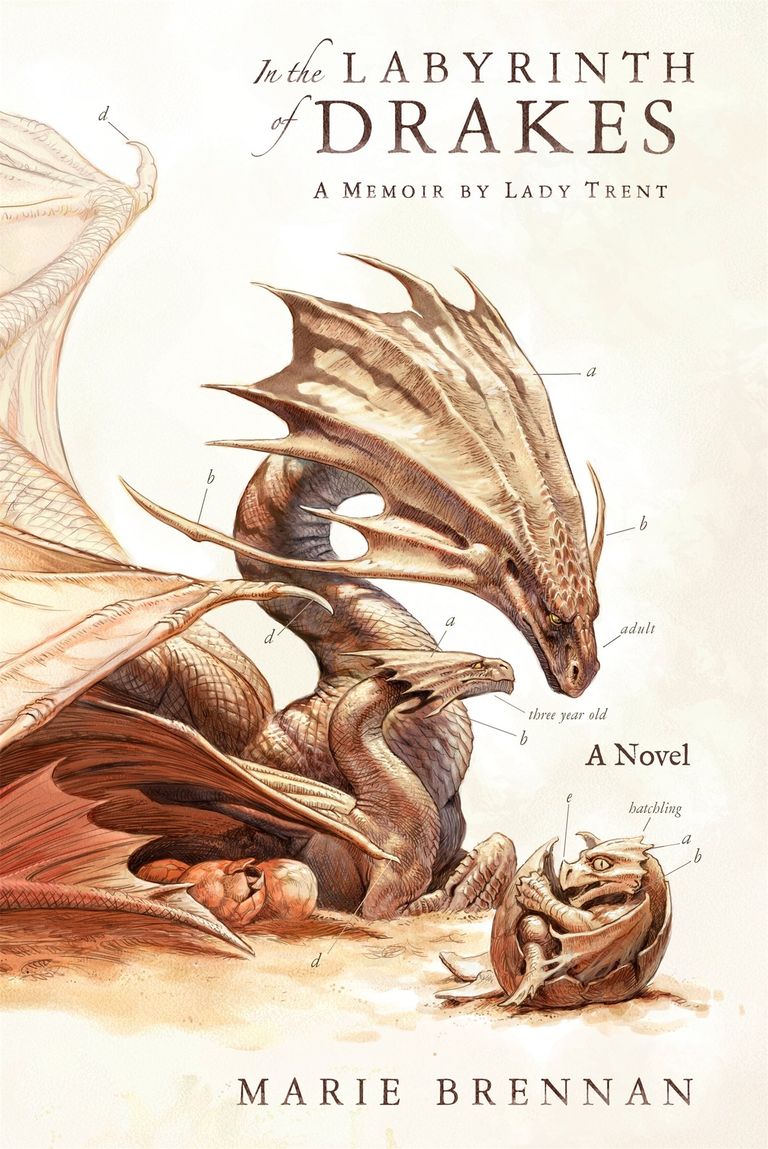 In the Labyrinth of Drakes: A Memoir by Lady Trent (A Natural History of Dragons 4)

The thrilling new book in the acclaimed fantasy series from Marie Brennan, as the glamorous Lady Trent takes her adventurous explorations to the deserts of Akhia.

Even those who take no interest in the field of dragon naturalism have heard of Lady Trent's expedition to the inhospitable deserts of Akhia. Her discoveries there are the stuff of romantic legend, catapulting her from scholarly obscurity to worldwide fame. The details of her personal life during that time are hardly less private, having provided fodder for gossips in several countries.

As is so often the case in the career of this illustrious woman, the public story is far from complete. In this, the fourth volume of her memoirs, Lady Trent relates how she acquired her position with the Royal Scirling Army; how foreign saboteurs imperiled both her work and her well-being; and how her determined pursuit of knowledge took her into the deepest reaches of the Labyrinth of Drakes, where the chance action of a dragon set the stage for her greatest achievement yet. 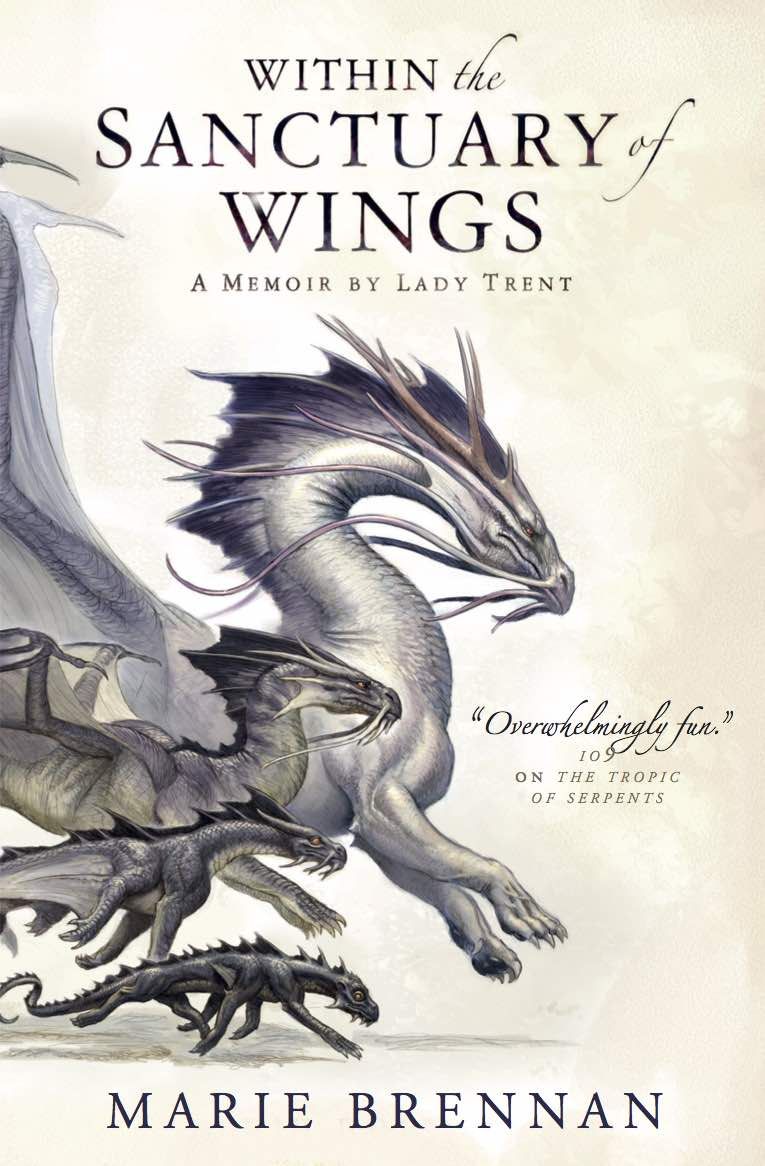 Within the Sanctuary of Wings: A Memoir by Lady Trent (A Natural History of Dragons 5)

After nearly five decades (and, indeed, the same number of volumes), one might think they were well-acquainted with the Lady Isabella Trent--dragon naturalist, scandalous explorer, and perhaps as infamous for her company and feats of daring as she is famous for her discoveries and additions to the scientific field.

And yet--after her initial adventure in the mountains of Vystrana, and her exploits in the depths of war-torn Eriga, to the high seas aboard The Basilisk, and then to the inhospitable deserts of Akhia--the Lady Trent has captivated hearts along with fierce minds. This concluding volume will finally reveal the truths behind her most notorious adventure--scaling the tallest peak in the world, buried behind the territory of Scirland's enemies--and what she discovered there, within the Sanctuary of Wings. 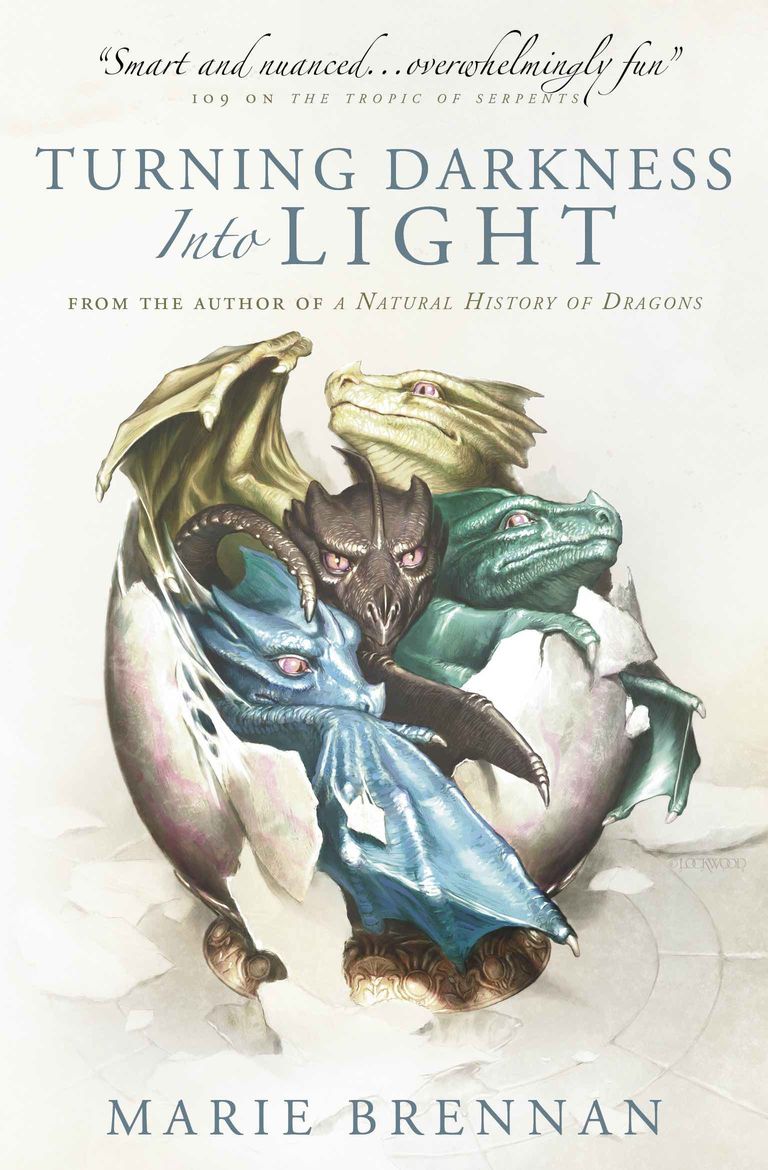 Want a standalone adventure? Then check out Turning Darkness into Light!

As the renowned granddaughter of Isabella Camherst (Lady Trent, of the riveting and daring Draconic adventure memoirs) Audrey Camherst has always known she, too, would want to make her scholarly mark upon a chosen field of study.

When Lord Gleinleigh recruits Audrey to decipher a series of ancient tablets holding the secrets of the ancient Draconean civilization, she has no idea that her research will plunge her into an intricate conspiracy, one meant to incite rebellion and invoke war. Alongside dearest childhood friend and fellow archeologist Kudshayn, she must find proof of the conspiracy before it’s too late.