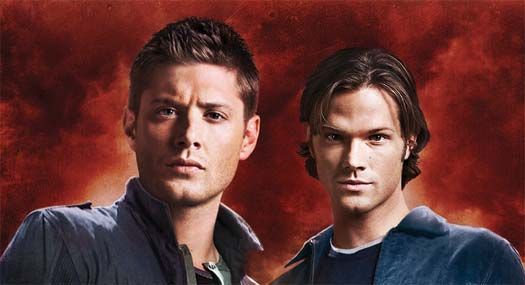 Supernatural: The Official Companion Season 5 is the new guide book to the hit TV show, packed with exclusive interviews, photos, behind-the-scenes secrets, a complete episode guide, plus a color portrait gallery of the stars.

The book is out in stores now, and if you're a Supernatural fan this is a must-have! But if you need further convincing, check out this exclusive excerpt featuring insights from series creator Eric Kripke and make sure you scroll down to the bottom of the page to find out how to win a very special prize!

******
On a show that had already featured several other gods, it makes sense that, once God and the Devil started stirring things up with the Apocalypse, those other gods would be a little concerned, to say the least. “The idea that a bunch of gods can be living undercover in the United States comes from Neil Gaiman’s American Gods,” Kripke reveals. “American Gods has always been a major influence on the tone of Supernatural and its storylines, so we owe Neil Gaiman a huge debt of gratitude. Actually, though, it was David Reed, our script coordinator, who had the idea of, ‘Why don’t they all have a convention and talk about the Apocalypse?’ So it really sprung from that. We were inspired by that, and we were really interested in the notion we’d been talking about all season, in which we were saying, ‘This is a really Christian Apocalypse — wouldn’t the other religions have something to say about it?’ It was always sort of bothering us, and finally we were able to have the episode [‘Hammer of the Gods’] where we could address that.”

As always, in season five, gods, demons, and assorted other supernatural creatures took a backseat to the central story of Sam and Dean Winchester. “Last season Sam and Dean kind of split up, then this season they came back together as brothers,” Kripke points out. “It happened in dribs and drabs, and we intentionally did that because that’s how we thought real relationships went. At first Dean couldn’t forgive Sam, and then they were back together, and then even when they were together, tensions resurfaced. Then finally both brothers had to just grow up.

“Sam had to truly overcome his addiction and darkness and really face in many ways what it meant — not just solving the symptoms, but solving the problem, which in our minds was that the anger came from self-hatred, because he always felt like a freak. He’d been calling himself a freak since season one, and finally he had to get over that and do the right thing, and be strong even though he was facing all this terrible temptation. We were talking about Sam’s story this season in many ways as the story of a recovering addict. You try to get back to your family and they’re angry at you and don’t trust you, and you need support and sometimes you get it and sometimes you don’t. You’re battling valiantly against the demons that are trying to seduce you back into your old life — in an addict’s case, figuratively, in Sam’s case, literally.

“Dean had to really grow up in his own way too,” Kripke continues. “He had to acknowledge that Sam isn’t all freak and that his brother really isn’t the snot-nosed kid that he’s had to keep on the straight-and-narrow. Dean had to both forgive Sam in a way and acknowledge that it wasn’t an older brother-little brother relationship anymore, that they were both truly equals. By the end of the season, I think he did that. The main reason he signed off on the Lucifer plan in the first place was that he decided that for better or for worse he had to back Sam’s play and trust him.

“I think this was a season in which both brothers took substantial moves in maturing and learning how to have a more functional relationship at the end of it all,” Kripke concludes. “Unfortunately, Sam dove into Hell just when they were about ready to figure their crap out — but such is the world of Supernatural.”
*****

We're giving away a copy of Supernatural: The Official Companion Season 5, signed by Jared Padalecki. For your chance to win this prize, click here.