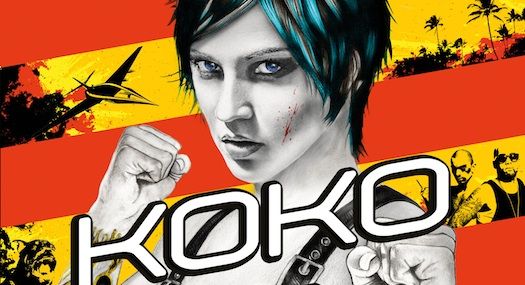 A few months ago a neighbor of mine, a self-professed bibliophobe, told me he finally purchased my first novel, Koko Takes a Holiday. We were standing on a pier close to where we both live, and feeling somewhat flattered, I thanked him. I asked if he’d read it, and my neighbor admitted that, yes, he had, adding it’d been a long time since he’d read a book for entertainment, let alone a book of science fiction so violent and funny. After a beat I sensed what he was going to say next. Handing me a bottle of water from the cooler at his feet, he leaned in and said, “Dude, how did you come up with a story like that?”

Since the publication of Koko Takes a Holiday last year, I’ve practiced answering varietals of this question. My go-to response has been that for several years prior to lucking into a great agent I indulged in writing fiction pretty much as a lark. Short crime stories, a couple of ghastly attempts at a private-eye novel… Piddling away at plot and prose fulfilled a personal craving that had been marginalized by rat-race distractions and responsibilities. After a while, though, one does wonder if one’s work is any good, and the only real way to find out is to put your efforts out there. Notching some successes in print and even getting paid for it? Yeah, that’s a pretty strong confidence tonic. Spurred on by my small victories, I kept at it.

When Plots With Guns (an online bellwether of bad boy/girl crime writers) announced it was doing a one-time “ray-guns” issue, I felt strangely compelled to give it a shot. I’d never written speculative fiction before and the submission guidelines—set a noir story five hundred years in the future—was an enticing hook. It was hardly a secret in the crime fiction community that the magazine’s editor at the time, Anthony Neil Smith, was a real stickler. I was once advised at a mystery writers’ conference that Smith, a prolific novelist himself and English Chair at Southwest Minnesota State University, “hates everything.” This, I learned, was not exactly one hundred percent true, but when Smith declined my initial two submissions for the issue for valid thematic reasons I did wonder if I had the chops to make the cut. As I stewed on these rejections, my desire to get into the issue somehow only increased, and in hindsight I suspect Smith knew I could do better. His pushback, while blunt, was just what I needed. Enter Koko Penelope Martstellar.

A few months after Koko’s first appearance in the Plots With Ray-guns issue, several writing friends suggested Koko deserved a longer treatment. I was skeptical. At the time I was knee-deep in revisions on my private-eye novel and having invested so much time in it I wanted to focus on that. When, after giving an early draft of this work in progress a cursory look, my future agent asked me what else I was working on I shyly admitted I’d an idea about a run-and-gun western set several hundred years in the future. The barometric change in her eyes said it all. “Oooh, when you’re finished with that let me take a look!” As the idiom goes—the rest is history.

Kieran Shea is the author of Koko Takes a Holiday. Its sequel Koko the Mighty is out today in the US & Canada and this coming Friday in the UK from Titan Books! Here’s what people said about Koko Takes a Holiday…

“A nonstop, bloody thrill ride with all of the subtlety of a rocket launcher, and I loved every minute of it." My Bookish Ways

“A fast-paced cyberpunk fantasy… teeming with colourful characters and a joyfully black sense of humour.” SciFiNow

“Darkly funny, intelligent and a little ultraviolent... action packed and humorous pulp science fiction at its best.” The Book Bag

“An amazing read that wonderfully mixes the works of cyberpunk and sci-fi space operas with a dose of acid and unapologetic violence to create a compelling and hard to put down novel.” Pop Cults