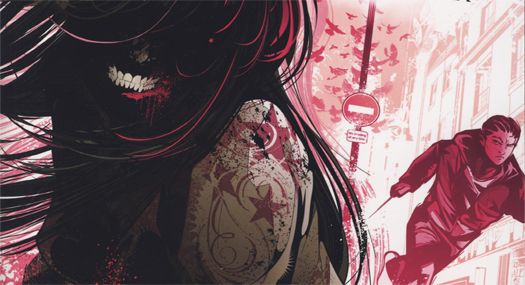 We chat to Peter Milligan about his new series Greek Street:

Stay tuned for the next part of our interview with Peter Milligan, where he talks about his work on the Hellblazer series!

See the first part of our interview here, where we discuss The Bronx Kill.

ABOUT GREEK STREET
You’re a boy from the hood. You’re brought up rough in a children’s home, trying to stay out of trouble but usually failing. then at 18 you decide to track down your mother. Within hours of finding her, she’s lying naked and dead at your feet. So you run to Greek Street. And that’s when your troubles really begin...

Boasting a cast of sexy strippers, murderous gangsters, body-snatching mad women and a disturbed young girl who can see the future, GREEK STREET is Peter Milligan’s re-imagining of those brutal and visceral tragedies that graced the Theatre of Dionysus in Ancient Greece - bloody tales about incest, homicide, beautiful oracles, all-knowing choruses, kings, monsters and gods - played out on the mean streets of modern-day London.