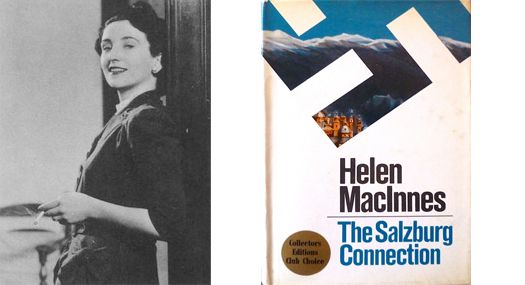 “Helen MacInnes can hang up her cloak and dagger right there with Eric Ambler and Graham Greene.” – Newsweek

London, U.K. – January 23, 2012 – Titan Books announced today that beginning in summer 2012, they will reissue the original spy thrillers by Helen MacInnes, whose career included novels spanning five decades, many of which were made into successful films, including Above Suspicion, The Salzburg Connection and The Venetian Affair.

Born in Scotland in 1907, Helen Clark MacInnes moved to New York with her husband, the classicist Gilbert Highet, in 1938. It was there she began her first book, Above Suspicion, (1941), a tale of espionage set in Nazi Europe, which became an immediate success and was made into a movie shortly afterwards. A string of taut, realistic, thrillers followed, often set against the background of World War II or the Cold War. Her heroes are not professional spies, but amateurs, caught up in extraordinary circumstances, who have to use all their physical and mental skills to defeat an often shadowy, elusive, enemy.

“The hallmarks of a MacInnes novel of suspense are as individual and as clearly stamped as a Hitchcock thriller.” - The New York Times

Critics and readers alike noted MacInnes’s skillful and credible portrayal of espionage and the characters involved in it. She credited her success to thorough research and her interest in international politics.

“I have loved Helen MacInnes’s novels all my life,” said Katy Wild, Editorial Director of Titan Books, “They are exciting stories, immaculately researched, but with immense integrity and heart. I always felt that she has been unfairly neglected in the revival of interest in the classic spy thriller genre, so I was delighted when I was able to enter into an agreement with her descendants. Our agreement with them will enable us to bring the books back into print and e-book formats and show readers what they’ve been missing all these years.”

“More class than most adventure writers accumulate in a lifetime.” - Chicago Daily News

“The scenes of adventure and detection are set deep in a solidly conceived background.” - Sunday Telegraph

HELEN MACINNES was born in Scotland in1907. She received her M.A. from the University of Glasgow in 1928. In 1932 she married classicist Gilbert Highet. In 1938, after Highet accepted a permanent post at Columbia University, and the family settled in New York City, becoming naturalized U.S. citizens in 1951. A short time after moving to New York, MacInnes began her first book, Above Suspicion (1941), and a string of bestsellers, translated into many languages worldwide, followed. Her final book, Ride a Pale Horse, appeared in 1984. She died in 1985.