‘You have been in Afghanistan, I perceive,’ said the Professor.

‘How the devil did you know that,’ I asked in astonishment.

His eyes caught mine. Cobra-eyes, they say. Large, clear, cold, grey and fascinating. I’ve met cobras, and they aren’t half as deadly – trust me. I imagine Moriarty left off tutoring because his pupils were too terrified to con their two times table. I seemed to suffer his gaze for a full minute, though only a few seconds passed. It had been like that in the hug of Kali’s Kitten. I’d have sworn on a stack of well-thumbed copies of The Pearl that the mauling went on for an hour of pain, but the procedure was over inside thirty seconds. If I’d had a Webley on my hip, I might have shot the Professor in the heart on instinct – though it’s my guess bullets wouldn’t dare enter him. He had a queer unhealthy light about him. Not unhealthy in himself, but for everybody else.

Suddenly, pacing distractedly about the room, head wavering from side to side as if he had two dozen extra flexible bones in his neck, he began to rattle off facts.

‘… you are retired from your regiment, resigning at the request of a superior to avoid the mutual disgrace of dishonourable discharge; you have suffered a serious injury at the claws of a beast, are fully-recovered physically, but worry your nerve might have gone; you are the son of a late Minster to Persia and have two sisters, your only living relatives beside a number of unacknowledged half-native illegitimates; you are addicted, most of all to gambling, but also to sexual encounters, spirits, the murder of animals, and the fawning of a duped public; most of the time, you blunder through life like a bull, snatching and punching to get your own way, but in moments of extreme danger you are possessed by a strange serenity which has enabled you to survive situations that would have killed another man; in fact, your true addiction is to danger, to fear – only near death do you feel alive; you are unscrupulous, amoral, habitually violent and, at present, have no means of income, though your tastes and habits require a constant inflow of money…’

Throughout this performance, I took in Professor James Moriarty. Tall, stooped, hair thin at the temples, cheeks sunken, wearing a dusty (no, chalky) frock-coat, sallow as only an indoorsman can be, yellow cigarette stain between his first and second fingers, teeth to match. And, obviously, very pleased with himself.

He reminded me of Gladstone gone wrong. With just a touch of a hill-chief who had tortured me with fire ants.

But I had no patience with his lecture. I’d eaten enough of that from the pater for a lifetime.

‘Tell me something I don’t know,’ I interrupted…

The Professor was unpleasantly surprised. It was as if no one had ever dared break into one of his speeches before. He halted in his tracks, swivelled his skull and levelled those shotgun-barrel-hole eyes at me.

‘I’ve had this done at a bazaar,’ I continued. ‘It’s no great trick. The fortune-teller notices tiny little things and makes dead-eye guesses – you can tell I gamble from the marks on my cuffs, and was in Afghanistan by the colour of my tan. If you spout with enough confidence, you score so many hits the bits you get wrong – like that tommyrot about being addicted to danger – are swallowed and forgotten. I’d expected a better show from your advance notices, “Professor”.’

He slapped me across the face, swiftly, with a hand like wet leather.

Now, I was amazed.

I knew I was vermilion again, and my dukes went up.

Moriarty whirled, coat-tails flying, and his boot-toe struck me in the groin, belly and chest. I found myself sat in a deep chair, too shocked to hurt, pinned down by wiry, strong hands which pressed my wrists to the armrests. That dead face was close up to mine and those eyes horribly filled the view.

That calm he mentioned came on me. And I knew I should just sit still and listen.

‘Only an idiot guesses or reasons or deduces,’ the Professor said, patiently. He withdrew, which meant I could breathe again and become aware of how much pain I was in. ‘No one comes into these rooms unless I know everything about him that can be found out through the simple means of asking behind his back. The public record is easily filled in by looking in any one of a number of reference books, from the Army Guide to Who’s Who. But all the interesting material comes from a man’s enemies. I am not a conjurer, Colonel Moran. I am a scientist.’

There was a large telescope in the room, aimed out of the window. On the walls were astronomical charts and a collection of impaled insects. A long side-table was piled with brass, copper and glass contraptions I took for parts of instruments used in the study of the stars or navigation at sea. That shows I wasn’t yet used to the Professor. Everything about him was lethal, and that included his assorted bric-a-brac.

It was hard to miss the small kitten pinned to the mantel-piece by a jack-knife. The skewering had been skilfully done, through the velvety skin-folds of the haunches. The animal mewled from time to time, not in any especial pain.

‘An experiment with morphine derivatives,’ he explained. ‘Tibbles will let us know when the effect wears off.’

Moriarty posed by his telescope, bony fingers gripping his lapel.

I remembered Stamford’s manner, puffed up with a feeling he was protected but tinged with terror. At any moment, the great power to which he had sworn allegiance might capriciously or justifiably turn on him with destructive ferocity. I remembered the Criterion barman digging into his own pocket to settle our bill – which, I now realised, was as natural as the Duke of Clarence gumming his own stamps or Florence Nightingale giving sixpenny knee-tremblers in D’Arblay Street.

Beside the Professor, that ant-man was genteel.

‘Who are you?’ I asked, unaccustomed to the reverential tone I heard in my own voice. ‘What are you?’

And I relaxed. I knew. My destiny and his wound together. It was a sensation I’d never got before upon meeting a man. When I’d had it from women, the upshot ranged from disappointment to attempted murder. Understand me, Professor James Moriarty was a hateful man, the most hateful, hateable, creature I have ever known, not excluding Sir Augustus and Kali’s Kitten and the Abominable Bloody Snow-Bastard and the Reverend Henry James Prince. He was something man-shaped that had crawled out from under a rock and moved into the manor house. But, at that moment, I was his, and I remain his forever. If I am remembered, it will be because I knew him. From that day on, he was my father, my commanding officer, my heathen idol, my fortune and terror and rapture.

God, I could have done with a stiff drink.

Instead, the Professor tinkled a silly little bell and Mrs Halifax trotted in with a tray if tea. One look and I could tell she was his too. Stamford had understated the case when he said half the folk in the Criterion Bar worked for Moriarty. My guess is that, at bottom, the whole world works for him. They’ve called him the Napoleon of Crime, but that’s just putting what he is, what he does, in a cage. He’s not a criminal, he is crime itself, sin raised to an art-form, a church with no religion but rapine, a God of Evil. Pardon my purple prose, but there it is. Moriarty brings things out in people, things from their depths.

He poured me tea.

‘I have had an eye on you for some time, Colonel Moran. Some little time. Your dossier is thick, in here…’

He tapped his concave temple.

This was literally true. He kept no notes, no files, no address-book or appointment-diary. It was all in his head. Someone who knows more than I do about sums told me that Moriarty’s greatest feat was to write The Dynamics of an Asteroid, his magnum opus, in perfect first draft. From his mind to paper, with no preliminary notations or pencilled workings, never thinking forward to plan or skipping back to correct. As if he were singing ‘one long, pure note of astro-mathematics, like a castrato nightingale delivering a hundred-thousand-word telegram from Prometheus.’

An ice-blade slid through my ribs into my heart.

The ice melted, and I felt tingly and warm. With the phrase, one of the family, he had arched his eyebrow invitingly.

He stroked Tibbles, which was starting to leak and make nasty little noises.

‘We are a large family, many cells with no knowledge of each other, devoted to varied pursuits. Most, though not all, are concerned with money. I own that other elements of our enterprise interest me far more. We are alike in that. You only think you gamble for money. In fact, you gamble to lose. You even hunt to lose, knowing you must eventually be eaten by a predator more fearsome than yourself. For you, it is an emotional, instinctual, sensual thrill. For me, there are intellectual, aesthetic, spiritual rewards. But, inconveniently, money must come into it. A great deal of money.’

As I said, he had me sold already. If a great deal of money was to be had, Moran was in.

‘The Firm is available for contract work. You understand? We have clients, who bring problems to us. We solve them, using whatever skills we have to hand. If there is advantage to us beyond the agreed fee, we seize it ...’

He made a fist in the air, as if squeezing a microbe to death.

‘… if our interests happen to run counter to those of the client, we settle the matter in such a way that we are ultimately convenienced while our patron does not realise precisely what has happened. This, also, you understand?’

‘Too right, Professor,’ I said.

‘Good. I believe we shall have satisfaction of each other.’

I sipped my tea. Too milky, too pale. It always is after India. I think they put curry-powder in the pot out there, or else piddle in the sahib’s crockery when he’s not looking.

‘Would you care for one of Mrs Halifax’s biscuits?’ he asked, as if he were the vicar entertaining the chairwoman of the beneficent fund. ‘Vile things, but you might like them.’

I dunked and nibbled. Mrs H was a better madame than baker. Which led me to wonder what fancies might be buttered up in the rooms below the Professor’s lair.

‘Colonel Moran, I am appointing you as head of one of our most prestigious divisions. It is a post for which you are eminently qualified by achievement and aptitude. Technically, you are superior to all in the Firm You are expected to take up residence here, in this building. A generous salary comes with the position. And profit participation in, ah, “special projects”. One such matter is at hand, and we shall come to it when we receive our next caller, Mister – no, not Mister, Elder – Elder Enoch J. Drebber of Cleveland, Ohio.’

‘I’m flattered,’ I responded. ‘A “generous salary” would solve my problems, not to mention the use of a London flat. But, Moriarty, what is this division you wish me to head? Why am I such a perfect fit for it? What, specifically, is its business?’

‘Did I omit to mention that?’

‘You know damn well you did!’

‘Murder, my dear Moran. Its business is Murder.’ 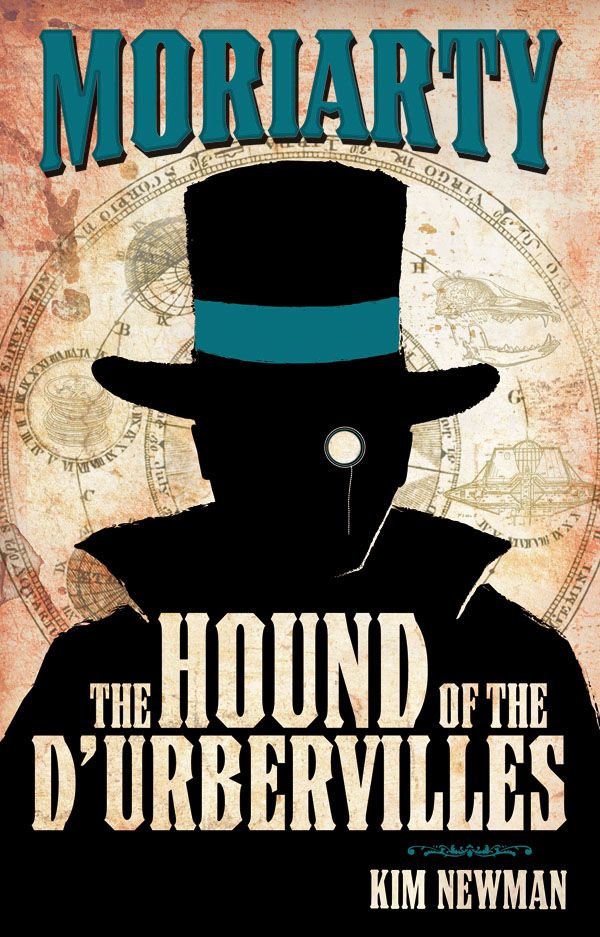 Imagine the twisted evil twins of Holmes and Watson and you have the dangerous duo of Prof. James Moriarty – wily, snake-like, fiercely intelligent, unpredictable – and Colonel Sebastian ‘Basher’ Moran – violent, politically incorrect, debauched. Together they run London crime, owning police and criminals alike. Unravelling mysteries – all for their own gain.