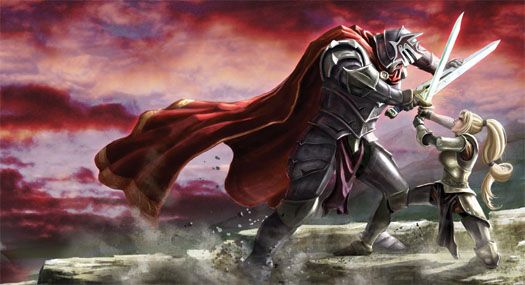 Master-at-arms Nicholas Sharpe shouted loudly into the wind in order to be heard by his fellow knights on the bridge. A fair young man ran forward, shielding his blazing torch from the anger of the winter storm.

“Thank you, Squire Theodore. Now, let us see what damage has been done.”

Half a dozen men stood around as firelight flickered over the fallen masonry. It was a life-sized statue of a knight which had come crashing down from the castle heights an hour after midnight, when the storm had been at its most ferocious. The
crash had been loud enough to raise the alarm.

“That’s more than a thousand pounds of solid stone,” Sharpe said, peering up into the darkness from whence it had plummeted. “Must’ve been a wicked gust to move it.

There was some jostling as the knights moved closer, every man packing himself as close to the statue as possible.

“One… two… three!” Sharpe counted out, and on his last call the small group of men lifted the marble statue with a collective groan of effort. “Carry him to the courtyard. We can’t leave one of our own out here in the cold!”

The men staggered under their burden, moving slowly from the exposed bridge toward the open gates, Squire Theodore lighting the way.

The statue will be safe there until the morning, the master- at-arms mused, as long as the damage wasn’t serious enough to break it into a thousand pieces as they moved it.

And as long as nothing more comes down on our heads, he added silently. It wasn’t safe in the streets of Falador that night; several people had already been killed by falling debris, and the quicker their party was back inside the castle, the better.

But the pessimistic thought turned to prophecy. A sharp crack, a sudden cry, and the statue dropped again to the paving, scattering the men who had lifted it. Only two had retained their grips on the polished marble, and now they held the right leg between them, detached from the rest of the figure.

“Get the torch back here!” Sharpe hollered, his temper rising. He swiftly noted the anxious faces gazing toward the courtyard. “Where’s the torch?” he called. “Where has Theodore got to?”

A sudden gust of wind, biting cold in its journey south from Ice Mountain, swept across the bridge. The squire emerged from the gatehouse, bringing the torch with him and carrying a heavy bundle under his arm. As soon as he reached the shivering party, there was a crack from above and a cry of warning rang out.

Each man instinctively looked up, crouching low in readiness. Spinning from the rooftops, a tile crashed onto the bridge and exploded on the stonework scant yards away, sending sharp chips of slate into the turbulent moat below.

“Come on; we must not stay out here any longer,” Sharpe said decisively. For all the statue meant, it wasn’t worth the lives of the young men who stood close to him. “Theodore, don’t run off again. We need the light to see what we’re doing.”

He noted the look of disappointment on the young man’s face. Theodore was an excellent squire; the master-at-arms couldn’t recall any better. Yet he took himself too seriously, making him an easy target for any of his peers who envied his dedication, or even despised him for it.

“I have blankets, sir,” Theodore said. “We can carry the statue on that. It will allow more of us to help lift it and prevent any more accidents like the last one…” His voice trailed off as a couple of the knights regarded him coolly.

“It’s a good idea, Theodore. Pull the blankets under the statue when we lift it—on three again!” And as soon as the men around him had obeyed, the master-at-arms began the count.

“Three!” Each man issued a grunt as they hefted their burden. A sudden flash erupted from the polished marble above the entrance to the courtyard, and once again the stone knight fell, the impact knocking several of the knights off their feet. One stumbled against Theodore, so that he was forced to loosen his grip on the spluttering torch and the light vanished as it splashed into a puddle.

Immediately, concerned voices called out in the darkness.

“Are we under attack?”

“There’s been no thunder—it must be magic!”

Sharpe bellowed from the side of the bridge.

*****
To continue reading the first chapter of Betrayal at Falador, download the PDF here.