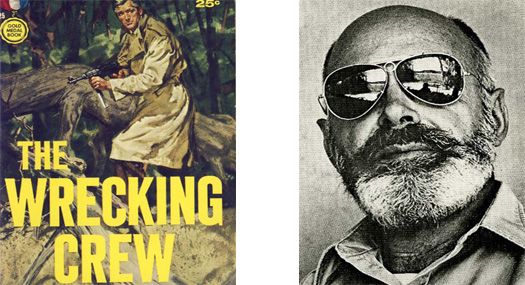 "Donald Hamilton has brought to the spy novel the authentic hard realism of Dashiell Hammett; and his stories are as compelling, and probably as close to the sordid truth of espionage, as any now being told." —New York Times

The first Matt Helm® novel, Death of a Citizen, was released in 1960, just two years after publication of Ian Fleming’s Casino Royale—which hadn’t yet caught on in the United States. Otto Penzler noted, “Whereas Bond was a sophisticate who knew wine, expensive cars, and tuxedos, Helm lived much of the time in the American Southwest, drove a pickup truck, and wore flannel shirts.” The novel introduced a man in his mid-thirties, 6’4” and intelligent, who had been a military assassin eliminating Nazis during World War II.

“Helm is about as credible a figure as one can find in the espionage genre.” —The New Republic

Hamilton’s novels were known for a gritty realism as Helm hunted (and killed) foreign agents and other enemies of the United States. When asked to describe his character, Matt Helm, Don replied "He's a nice guy, he just happens to kill people for a living."  The action was methodical, even brutal, and the series quickly attracted an avid following. The books sold more than 20,000,000 copies worldwide before disappearing from bookstore shelves.

“These novels were among the best spy thrillers ever published,” said Nick Landau, Publisher of Titan Books and CEO of the Titan Publishing Group.  “We’re thrilled to partner with the estate of Donald Hamilton, enabling us to bring them back into print and show readers what they’ve been missing all these years.”

“Helm is a genuinely tough and tough-minded protagonist…  your reading diet lacks essential vitamins if you overlook him.” —New York Times

“This series by Donald Hamilton is the top-ranking American secret agent fare, with its intelligent protagonist and an author who consistently writes in high style. Good writing, slick plotting and stimulating characters, all tartly flavored with wit” —Book Week

“With Matt Helm, Donald Hamilton helped start the spy adventure genre. I welcome the reissue of these books so that readers can experience this mythic hero." —David Morrell, New York Times bestselling author of Murder as Fine Art