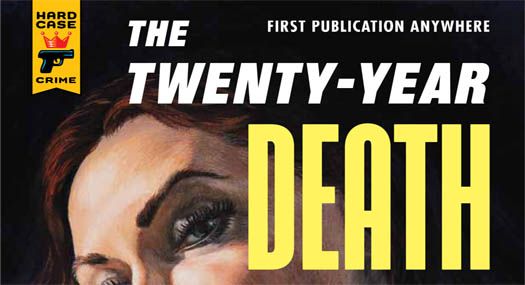 "Writers who pay homage to their literary deities by imitating their idiosyncratic voices and distinctive styles usually end up looking like kids playing dress-up in their parents’ clothes. Which makes the stunt Ariel S. Winter pulls off in “The Twenty-Year Death” — three loosely linked but self-­contained novels set in consecutive decades and written in the manner of Georges Simenon, Raymond Chandler and Jim Thompson — all the more extraordinary."
NY Times

"Sure to provide hours of enjoyable reading for mystery fans looking to while away the time this summer."
Wired.com

"The Twenty-Year Death is an irresistible read, one that demands cuddling up to a soundtrack of gloomy rainstorms. For lovers of noir fiction or admirers of pure literary audacity, this book is an imperative."
Badass Digest

"Winter’s book was a calculated gamble that pays off as a real late-summer blowout."
The A.V. Club

"Ingenious...the beauty of Winter's construction is the way it allows him to push the boundaries"
LA Times

"..It’s difficult not to feel a little spellbound by “The Twenty-Year Death.” In the final oddly triumphant image of Shem — “And I grinned all the way” — I thought I could glimpse the author’s giddy glance back at his achievement here: outrageous, obsessive, playful. Such qualities should win over aficionados of the writers emulated here — and make them fans of this fresh new voice in crime fiction."
The Washington Post

And check out what literary legends including Stephen King and John Banville thought about the book:

“Bold, innovative, and thrilling – The Twenty-Year Death crackles with suspense and will keep you up late.”

“Not content with writing one first novel like ordinary mortals, Ariel Winter has written three – and in the style of some of the most famous crime writers of all time for good measure. It's a virtuoso act of literary recreation that's both astonishingly faithful and wildly, audaciously original. One hell of a debut.”

“The Twenty-Year Death is a bravura debut, ingenious and assured, and a fitting tribute to the trio of illustrious ghosts who are looking – with indulgence, surely – over Ariel Winter’s shoulder.”

“The Twenty-Year Death is an absolute astonishment. Ariel S. Winter manages to channel three iconic crime writers and pull off a riveting story of a two-decade ruination in which it is the things not said that somehow have the loudest echoes.”

“As an old-school fan of Georges Simenon, I read MALNIVEAU PRISON with awe and delight.”

-- Alice Sebold on Book 1 of The Twenty-Year Death

“Expertly summoning the most sinuous strains of Chandler, THE FALLING STAR sinks you into its dark, sleek world.”

-- Megan Abbott on Book 2 of The Twenty-Year Death

“If I didn't know better, I'd swear that Hard Case had unearthed a long-lost Jim Thompson novel. POLICE AT THE FUNERAL is one of those great, boozy, violent nightmares that (I used to think) only Thompson himself could conjure.”

-- Duane Swierczynski on Book 3 of The Twenty-Year Death

“Pitch perfect. A tour de force of story, structure and style. This is why I read.”

“If ever there was a born writer, Mr. Winter is one…Mr. Winter's work is sharp, smart, original, intensely interesting and ingenious.”

“A tour de force, or rather three different, ingeniously interwoven, tours de force.  An exciting book that will make many commuters miss their stop.”

“The Twenty-Year Death is an exceptionally ambitious, inventive crime novel that echoes three classic authors while extending the idea of what a crime novel can do. The scope and versatility are breathtaking. Bravo to Ariel S. Winter and Hard Case Crime.”

“As distinguished a first-novel in the noir fiction genre as any I know of.  Indeed, it is three novels in one, and each is in its own way a tour de force.  If this is the level of excellence that Winter can achieve at the very start of his career, then his future in this genre is unlimited.”