We're delighted to announce details of the Limited Editions of LATER by Stephen King! Pre-order links are now live!

Click here to preorder: Forbidden Planet (UK) | Another Universe (US)

LATER by Stephen King is a new trade paperback novel published by Hard Case Crime in March 2021. Hard Case Crime is also producing a rare collector’s edition of the book in hardcover, which will be offered in three strictly limited variations! 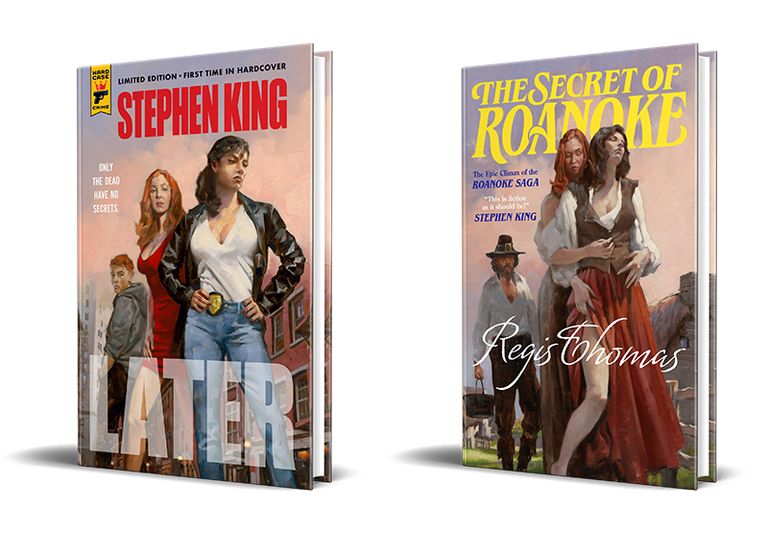 The hardcover limited editions all feature two exclusive covers painted by acclaimed artist Gregory Manchess, each on its own separate dustjacket. These covers are variants to the standard trade paperback edition. The bonus jacket is a mock-up cover of The Secret of Roanoke by Regis Thomas, a fictitious novel that features prominently in the plot of Later.

Head over to EW.com to read an excerpt from the book, and check out the exclusive covers painted by Gregory Manchess!

The son of a struggling single mother, Jamie Conklin just wants an ordinary childhood. But Jamie is no ordinary child. Born with an unnatural ability his mom urges him to keep secret, Jamie can see what no one else can see and learn what no one else can learn. But the cost of using this ability is higher than Jamie can imagine – as he discovers when an NYPD detective draws him into the pursuit of a killer who has threatened to strike from beyond the grave.

LATER is Stephen King at his finest, a terrifying and touching story of innocence lost and the trials that test our sense of right and wrong. With echoes of King’s classic novel It, LATER is a powerful, haunting, unforgettable exploration of what it takes to stand up to evil in all the faces it wears.

DUSTJACKET: Variant from TPB edition, plus featuring bonus dust jacket wrapped underneath so fans can switch if they want. Bonus jacket is mock-up cover of The Secret of Roanoke by Regis Thomas, a novel that features in Later. Both HB dustjacket paintings by Gregory Manchess.

TRAYCASE SPECIFICATION (Lettered Edition only): Black, with a single hit of gold foil on the front with HCC logo, and a ribbon. Cartonned and shrinkwrapped.

LETTERED: Lettered edition X out of 26.

NUMBERED: Numbered edition X out of 374

PAPER COLOUR, STOCK & WEIGHT: Printed on the back cover of the main dust jacket

Click here to preorder: Forbidden Planet (UK) | Another Universe (US)