1/ In the introduction to Dinosaur Art, Dr Scott D. Sampson talks about paleoartists not receiving much credit in the art world. Why do you think this is the case?

I always assumed it was because paleoart is rarely seen outside the context of its subject matter. Most people probably look at the images and go, "Wow, cool dinosaur." The work of a paleoartist isn't really seen in the context of art; it's either supporting science in academic volumes, or being used to visually inform the public in the likes of National Geographic Magazine. Modern Natural History art is a form in and of itself; you see exhibitions dedicated to it; there are lots of books collecting the works of numerous natural history artists. And yet paleoartists, many of whom are as good as many top-flight modern illustrators, are being overlooked, so I thought this book was an opportunity to redress that balance.

2/ What are the main qualities of being a paleoartist and how does this differ from simply being an artist who sketches dinosaurs?

It's interesting. I have worked in comics for 25-odd years and comics and dinosaurs share a mutual love. I've seen a lot of artists drawing dinosaurs, largely for fun, and the other day I was looking at a strip that included a T-rex. It suddenly occurred to me that so many comic artists do really great T-rex heads, presumably because there's a lot of easily available references and stills from Jurassic Park but then you look at the body and it's okay, but they invariably get the arms wrong. They know a Tyrannosaur has two fingers but I think the defining difference between a paleoartist and an artist who just draws them for fun is that the former would factor in how the arm and the fingers are held. Most 'amateurs' would probably draw them like a human arm with two claws. This isn't a criticism, merely a matter of degrees, a yardstick that measures who seriously a paleoartist would take it.

3/ Has paleoart changed the way we perceive dinosaurs?

Yes, I think so. Dinosaurs (and other fossil creatures) continue to make the news on a regular basis and you rarely see a report on the BBC or CNN website without at least one nicely rendered illustration alongside it. I think there's been a bit of a paradigm shift in how prehistoric animals and dinosaurs especially are perceived lately. It's not just that dinosaurs have become more funky in recent times, with feathers and interesting behaviour; I think it's because people are just tired of seeing bones gathering dust in museums. People are becoming more interested in how they appeared in life, which, in my humble opinion, is a direct response to the way dinosaurs are being studied; it's not just about the anatomy anymore. It's how they lived and bred and ate, and I think great paleoart can really propel that desire along.

4/ Who were the first paleoartists and how has science/technology over the years changed the way paleoartists work?

The first real paleoart superstar was Benjamin Waterhouse House. He was the man who in the 1850s built the famous Crystal Palace dinosaurs. He tried the same thing in New York but fell foul of corruption ruining the city at the time, and had his studio devastatingly vandalised. But he, like pretty much every true paleoartist since, found his work obsolete as the understanding of dinosaurs grew. Even now, an artist can find his work made redundant by a new discovery within weeks of completing it (I heard the other day that, on average, one new dinosaur is named every week). The big difference now is that with so many paleoartists producing digital art, it's just a case of reaching for the graphic tablet and making whatever adjustments need doing on screen. I guess that means that many of the artists will no longer have to face the humiliation of hiding away those embarrassing scientific faux pars in the bottom of their plans chests...

5/ Can you explain your fascination with dinosaurs?

In a word, no. I have been asked this question a great many times, both about myself and in general, and it's hard to explain. Maybe it's because they are actually monsters that are real? Not mythological, not fantastical, but quantifiable. Maybe they are just intrinsically cool? I do suspect sheer size might have something to do with it. It's hard not to look at the Diplodocus skeleton in the Natural History Museum and not be a little bewildered at how something so awesome could have really bestrode the narrow earth like a colossus.

6/ You mention that Dinosaur Art represents the latest stage of paleoart, so where do you see this art form in 10 years time?

You can already see that the digital revolution is taking over paleoart at its grass roots. You look on deviantART and pretty much all the newcomers are using computer-generated art and I think you're seeing the first indications of what's next. Many are doing animations, motion-based stuff, and I think as iPads and the like become more widely available, it would make sense for electronic art and animations to become the norm. I do still hope there'll be Old Guard members and younger artists influenced by them still producing traditional artwork - I like to think there'll always be room for paintings done in gouache or acrylics!

7/ And finally, what killed the dinosaurs?

Well that's the real trick isn't it. I think most paleontologists and geologists would agree that some sort of cosmic collision took place about 65 million years ago at the point marking what's called the K/T boundary - where the Cretaceous period ends, signalling the end of the reign of the dinosaurs, and the start of the Tertiary Period, where mammals rose to dominance. There's a 110 mile-wide impact crater in Mexico that seems to mark the point of impact of a body about six miles in diameter. The result would have been, in anybody's book, catastrophic and would have done untold damage to the global ecosystem (bear in mind it wasn't just the dinosaurs that were wiped out; huge numbers of creatures vanished in the sea as well as on land; all the marine reptiles like plesiosaurs; ammonites; many types of plankton etc). I remember reading somewhere that no animal over 25 pounds survived. Not sure if that's entirely accurate as crocodiles and their kin did OK, but then they can effectively hibernate. However, there may have been other contributing factors: massive volcanic eruptions - where the Earth's crust effectively split open – were tearing apart what is now northern India and creating what's called the Deccan Traps - huge fields of basalt and lava. There was also massive geological changes taking place as plate tectonics was moving the continents into roughly their present positions. This affected sea levels and currents, and the weather. So, maybe it was some sort of triple whammy. 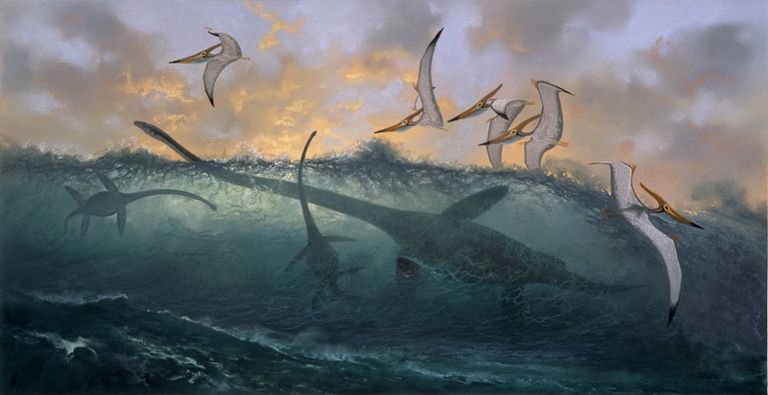