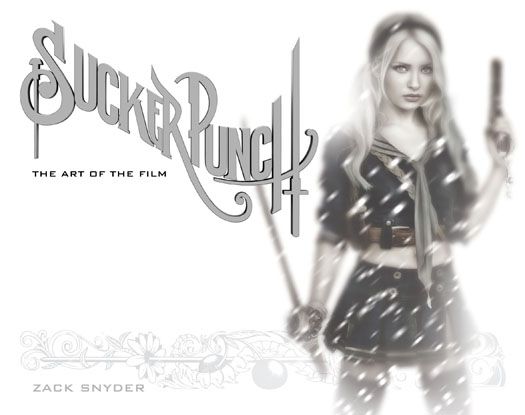 From Warner Bros. Pictures and directed by Zack Snyder (“Watchmen”, “300”), “Sucker Punch” hits movie  screens in March 2011. To celebrate the release of this extraordinary epic action fantasy, Zack Snyder and Titan Books are offering fans an unprecedented opportunity to secure a spectacular limited edition of the official tie-in book ahead of the release of the eagerly awaited film.

In Sucker Punch: The Art of the Film, Zack Snyder takes you on a personal journey through the many worlds and memorable characters of the film, offering a unique insider’s look at amazing concept and design art, as well as a wealth of stunning on-set photography by world-renowned Clay Enos (Watchmen: Portraits).

This limited numbered run of only 750 copies is presented in an exclusive slipcase, and signed, on a special tipped-in sheet, by Snyder himself!

Already bursting to the seams with eye-popping art, each Limited Edition will also boast its own breathtaking exclusive giclée print, created and signed by Alex Pardee, the acclaimed artist who has brought his unique style to the film.

Available for pre-order from today, those lucky enough to get their hands on this sought after book will be amongst the first to peek behind-the-scenes of the most highly anticipated film of 2011. The Limited Edition can be pre-ordered now at Amazon.com: http://tinyurl.com/suckerltd