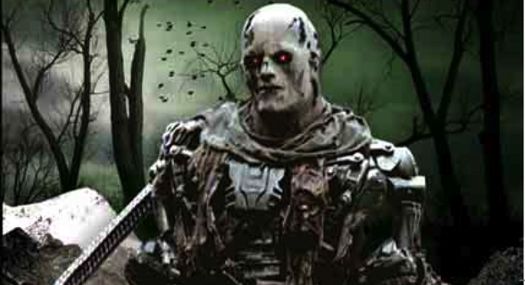 In anticipation of the release of Timothy Zahn's Terminator Salvation novel Trial By Fire, we've got a fantastic excerpt from the last book in the series: Cold War. If you've ever wondered who would win in a fight between a bear and a Terminator, now's your chance to find out! 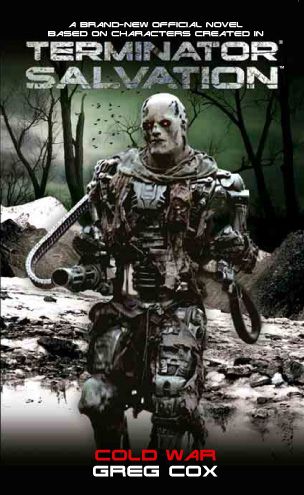 The Terminator stalked the wilderness. Titanium legs rose and fell like pistons, never missing a step, as they waded relentlessly through the snow. Thick drifts muffled its heavy tread. The sub-zero temperature might have compromised its hydraulics, but the T-600 hadn’t bled enough antifreeze to significantly endanger its mobility. The machine had been pursuing the dog sled without pause for 5.633 hours now. It was neither bored nor discouraged. The humans had left a clear trail. They would be terminated. The only variable was when.

A small nocturnal mammal scurried away from the machine’s approach. Its optical sensors identified the specimen as Muslela erminea, the short-tailed weasel. The animal’s ermine coat was effective camouflage in this wintry setting, but failed to hide the creature from the T-600’s heat and motion detectors. Its CPU instantly processed the data.

The Terminator let the weasel go. Such lower life forms were not considered threats to Skynet’s continued existence. Only humans required eradication.

The trail ascended into the mountains. From its vantage point, the Terminator glimpsed what appeared to be derelict wooden structures infesting the southwest face of a hillside, several kilometers above. Geographical records, downloaded from Skynet, confirmed the existence of a former mining installation at those coordinates. The T-600 weighed the possibility that the human Resistance had taken shelter in the supposedly abandoning buildings. The hypothesis held promise, but could not be verified without closer inspection. It would be premature to dispatch reinforcements to the site.

A ferocious roar interrupted the Terminator’s assessments. Its cranial case rotated atop the exposed neck assembly. A large hirsute mammal lumbered into view 10.791 meters to the right. Thick brown fur, accented by silver tips, covered the beast—which appeared to weigh approximately 250 kilograms. It stood a meter tall at the shoulders while approaching on all fours. A disproportionate hump of muscle mass, arrayed above its shoulders, had evolved to add power to its forelimbs. Eight-centimeter-long claws sank into the snow beneath it. Hostile brown eyes glared at the Terminator. Yellow fangs flashed within its gaping maw. Its physical characteristics and overall configuration matched that of Ursus arctos horribilis. The grizzly bear.

The Terminator shifted to defensive mode. Unlike the ermine, the grizzly was an alpha predator of considerable mass and strength, displaying clear signs of aggression. The bear rose up on its hind legs until it was fully as tall as the T-600. Its size and weight indicated that it was an adult male. An angry growl issued from its open jaws. A partially devoured caribou was splayed open on the ground 2.885 meters behind the grizzly, its bloody entrails exposed to the air. The carcass explained the bear’s territorial behavior; it was defending a kill.

The grizzly’s presence was an unexpected complication. Given the season and temperature, the bear should have been hibernating. The data on the species indicated that grizzlies could be unpredictable in this regard, however. It was possible that the recent explosions and subsequent fires had roused the bear from its slumber. Or else the animal had simply craved raw meat.

In any event, the bear was an obstacle. The Terminator swiftly analyzed its options. It briefly considered detouring around the creature, in order to avoid provoking it further, but doing so risked losing the dog sled’s trail. Should that occur, the Resistance base would remain hidden within the sprawling Alaskan wilderness.

So the T-600 marched forward, its metal fists clenched in anticipation. As predicted, the grizzly reacted aggressively to the challenge. Dropping down onto all fours, it charged at an average rate of 50.824 kilometers per hour. Saliva sprayed from its snarling jaws. The T-600 braced itself for the collision.

The bear slammed into the machine with the force of a speeding snowmobile, knocking the Terminator onto its back. Heavy paws pinned the machine to the earth. Powerful jaws closed on the robot’s cranial case. Ivory fangs shredded what remained of the infiltrator model’s human disguise before breaking against a titanium skull. Hydraulic fluid spurted from a severed cable. A jagged
tooth lodged in the T-600’s cranium. Another fang speared the Terminator’s left optical sensor, shattering the lens. Circuits shorted within the socket. The Terminator’s visual display wavered and went out of focus for 6.003 seconds before recalibrating. Angry claws scraped against an impervious endoskeleton.

The Terminator’s right arm shot up and seized the bear by the throat. Servomotors whirred as the arm pushed the grizzly’s head up and away, operating like a hydraulic jack. Its joints locked into place, putting precisely 67.426 centimeters between the Terminator’s face and the grizzly’s snapping jaws. The furious bear roared in frustration. Slobber dripped into the T-600’s damaged eye socket. Miniature baffles closed to prevent further contamination.

Every moment wasted in an engagement with the animal increased the risk of additional damage, and delayed the completion of the Terminator’s assigned purpose. It worked its free arm out from beneath the grizzly’s bulk. The elbow joint bent to a ninety-degree angle. A steel fist rocketed upward with enough force to punch through solid concrete, smashing through the grizzly’s rib cage and into its heart. The meaty organ exploded upon impact.

The grizzly went limp, turning into 263.472 kilograms of dead weight. Its fierce brown eyes glazed over. The Terminator withdrew its fist. A torrent of hot arterial blood gushed from the gaping cavity in the bear’s chest, spilling onto the T-600’s supine form. Steam rose from the crimson flood. The machine took hold of the dead grizzly with both hands, shifting its grip to improve the leverage
before tossing the carcass aside. It landed with a heavy thump, not far from the disemboweled caribou. The blood of predator and prey mingled atop the snow.

The machine rose to its feet. Claw marks scored the surface of its endoskeleton. Sticky red fluid, cooling rapidly in the cold night air, streamed down its chassis to pool at its feet. The shattered optical sensor blinked out, leaving the T-600 blind on one side and compromising its depth perception. Although there had been minor damage to an actuator in its lower jaw, and two internal valves had been wrenched loose by the impact with the grizzly, a thorough diagnostic reported no other major malfunctions. Backup systems compensated for damaged components. Valves resealed to prevent loss of vital lubricants. A fang remained embedded in its skull.

The grizzly had inflicted significant damage, the Terminator concluded, but not enough to deter it from fulfilling its programming. Its remaining optical sensor zeroed in on the decaying buildings high up on the slopes of the mountain. The humans’ trail continued to lead in that direction. The T-600 saw no reason to linger at the site of the battle. Leaving the dead bear behind, it marched uphill.