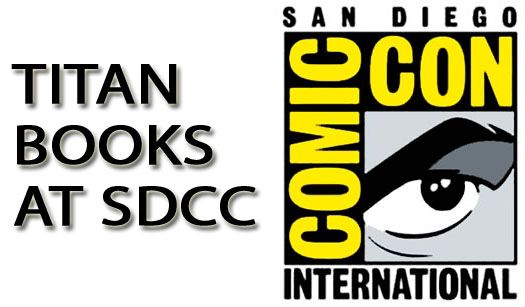 The final countdown has begun for SAN DIEGO COMIC-CON 2011. Here at THE TITAN BOOTH, things are gearing up for a great Con, with guest favorites, amazing show exclusives, and an enviable prize draw on Booth 5537!

Fans of Drew Struzan will be thrilled to learn of his special appearance at the Con this year for the unveiling of a special poster for the new film Cowboys & Aliens created at the request of the film’s producers, but that’s not all!

Booth 5537 will also be the place you can get hold of a Limited Edition of Drew’s gorgeous new book Drew Struzan: Oeuvre. Struzan has created some of the most iconic movie poster images of the last 30 years, from Raiders of the Lost Ark to Star Wars: Episode III. With an Introduction by George Lucas, Oeuvre features over 300 pieces of art, including all of Drew’s most iconic movie images, as well as other highlights of his career, from album, book and comic book covers, to stamps, trading cards and original works. This sumptuous signed and numbered slipcased hardcover edition also comes with a signed and numbered art print.

With his colorful spaceships, intricate machines and futuristic cities, Chris Foss revolutionized the science fiction book covers of the 1970s and the 1980s. Hardware is a comprehensive collection of covers Chris Foss created for modern science fiction, including for Isaac Asimov’s Foundation trilogy, E.E. ‘Doc’ Smith’s Lensman series, and works by A. E. Van Vogt and Philip K. Dick. Presented in a slipcase with an alternative cover, this signed limited edition features an extra 8-page Foss book cover gallery and a signed Chris Foss print in an envelope.

In this stunning official book, Zack Snyder (300 and Watchmen) guides you through the many amazing worlds and characters of Sucker Punch, with eye-popping production art and stunning photographs by Clay Enos (Watchmen: Portraits). This Comic-Con Exclusive, limited to only 50 copies, boasts a specially designed Bookplate illustrated by Alex Pardee and signed by Zack Snyder himself!