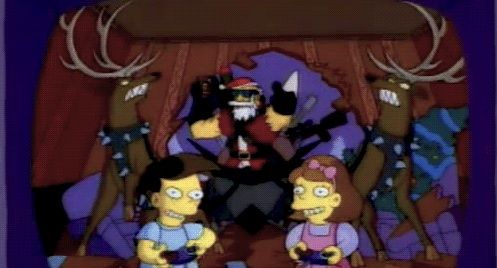 The Simpsons at Christmas: 5 episodes to get you in the holiday mood!

Now that December is finally here, what better way to celebrate the festive season then by curling up with America’s favourite family? Publicity Assistant Philippa Ward gives the lowdown on the top five Simpsons episodes that will get you ready for Christmas. WARNING: spoilers ahead. 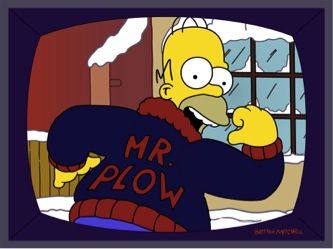 “Get out you lousy… season.”

When Homer destroys both family cars after a night out at Moe’s he invests in a plow and starts using it to clear driveways under the name ‘Mr Plow’. Soon afterwards Barney has a similar idea, which leads him to take away Homer’s business and blackens his friend’s once-good name.

There’s a reason this episode is viewed as one of the classics; it’s fast paced with joke after joke on point. From Crazy Vaclav’s garage to Grandpa’s Old Man Winter, Mr Plow will have you laughing into your mulled wine. It may not be especially Christmassy but it has got Adam West and a ‘cool’ rap number. Enough said. 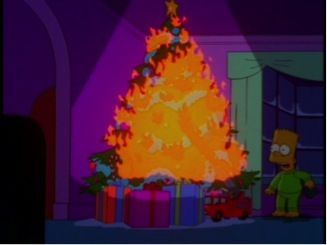 “Hey, since when is Christmas just about the presents? Aren’t we forgetting the true meaning of this day? The birth of Santa.”

After getting up early on Christmas Day, Bart accidently burns down the family’s tree. Instead of admitting his mistake he lies to the family and tells them a burglar stole all the presents. Upon hearing the Simpsons tale of woe the townspeople take pity on them and raise thousands of dollars to help out. When they find out Bart has been lying they decide to take the family’s possessions and leave them with a single washcloth.

Spoofs of Christmas films abound as Miracle on 34th Street, It’s a Wonderful Life and A Charlie Brown Christmas all make an appearance. It’s a bittersweet episode with tons of cringe-worthy moments, but at the end the Simpsons brings home the message that if you have nothing at Christmas you can be still happy unless you don’t have a washcloth. Then you’re screwed.

When the children of Springfield Elementary get snowed-in Principal Skinner tries to assert control. However, the children soon overthrow him and take over the school. In the end they have to be rescued by Homer and Ned Flanders.

A little gem in the twelfth season, Skinner’s Sense of Snow is full of great quotes, including the one every kid wants to hear at Christmas…  “If you don’t eat your relish, you’re not getting any mayonnaise.” It’s packed full of sneaky film references for hardcore fans, and for the casual viewer the sight of Mr Burns playing soccer with snow plows is reason enough to watch this episode. 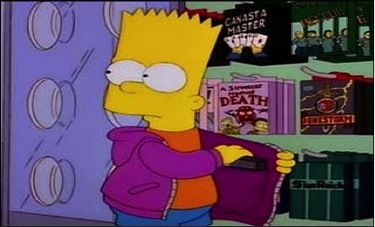 “'Tis the season Marge. We only get thirty sweet noggy days.’

Bart asks for a violent video game for Christmas, but when Marge says no he decides to steal one from the local Try’N’Save. He is apprehended by a security guard and warned not to return to the shop. However, when Marge surprises the family with a Christmas outing the day after at the very same store, Bart is caught and outed as a thief, which leaves Marge devastated. Bart then tries to fix their fractured relationship and prove himself a good egg.

This is one of my personal favourite episodes as it manages to be heart-rending and hilarious at the same time. All the characters are on top form, especially the gruff security guard Don Brodka. That’s right: Don Brodka. It manages to avoid all the holiday clichés but makes it clear that it is better to give than to receive, even if you get Lee Carvello’s Putting Challenge instead of Bonestorm. It also teaches us that:

2. A soiled wig is a disappointing present.

3. Chin putty is a lame disguise. 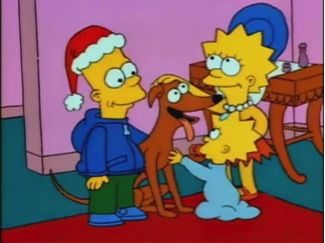 “Dad you must really love us to sink so low.”

When Bart decides to get a tattoo, Marge uses up all the Christmas money getting it removed. Homer takes a second job as Santa at the mall to disguise the fact he hasn’t received his Christmas bonus.

It’s the one that started it all. The mother of all Simpsons festive episodes. No Christmas episode can beat the sheer brilliance of Simpsons Roasting on an Open Fire. It has everything: Christmas cheer for your nan, an adorable dog for your niece and holiday disillusionment for your weird uncle who uses Christmas as a chance to rant.

It’s strange to think The Simpsons will soon be turning thirty when so much of their classic material is still as poignant and valid today as it was when it first aired. If you love The Simpsons as much as we do then check our Simpsons 2016 Annual Comics filled to the brim with brand new comic strip adventures, available to buy here.