On Day two of the Titan Christmas Calendar, we’re delighted to share the cover for the third Mick Oberon book: Dead to Rites! 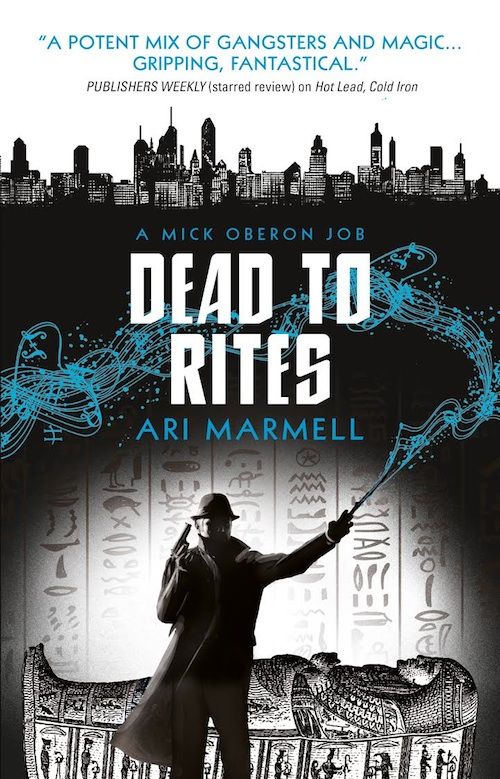 This series about 1930s Chicago PI (and Fae) Mick Oberon began with Hot Lead, Cold Iron, and continued with Hallow Point—so you have some guns, wands, gangsters and fairy action to catch up on before Dead to Rites hits bookstores in August 2016.

"I’ve been ecstatic over Titan’s covers for the Mick Oberon series so far, and this one’s no exception. It really feels to me like it provides a solid sense of the mood and feel of the book, and it tells you a lot about what to expect in the story—while actually giving away far less of the plot than it first appears. I’m excited that we’re finally able to show it to people.

Even Mick Oberon—private investigator and exiled noble of the Seelie Court—is having some difficulty telling what’s real and what isn’t on the streets of Chicago these days. The rash of misfortune that’s been plaguing him lately, for instance. Random chance? The whims of luck? Or something else, something malevolent, something REAL?

The people seeking out his friends, asking questions about him? Real. But how much danger do they pose?

The woman who wants him to track down Ramona, his friend/enemy/whatever they were to each other? Real. The story she fed him, though? Almost certainly not.

The uptown gang whose path he keeps crossing? Oh, quite real. The oracle he’s randomly bumped into at the carnival of all places? Maybe.

And then there’s the mummy. In the carnival’s cheap and gaudy Egyptian-themed funhouse, SOMETHING about the mummy is all too real. Because far too many of Chicago’s occultists—including Ramona and her mysterious employer—are trying to steal the damn thing.

All Mick knows for sure is that, until he can figure out precisely what everyone wants and who’s involved, until he can determine the source of his on-going bad luck, he’s vulnerable. And the threat, whatever it is and from whatever direction it may be coming, is very, very real."

Join us tomorrow on Twitter for a magical #TitanXmas calendar giveaway…